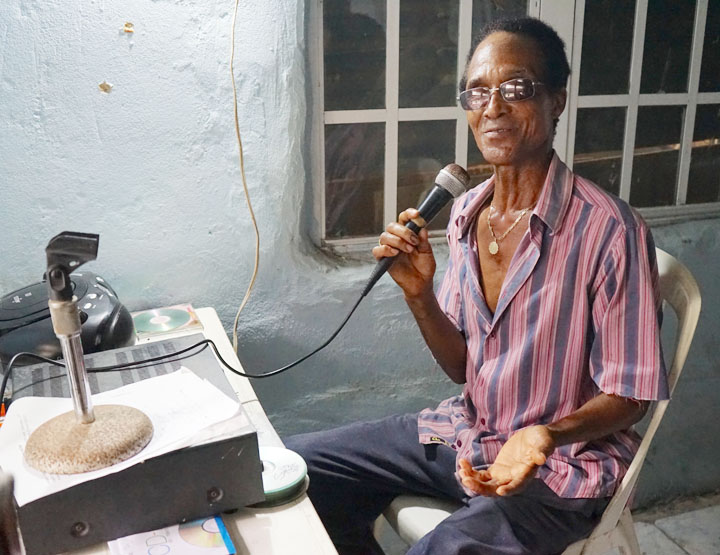 Story and photos by Gemma Handy

For as long as most residents can remember, public announcements in Barbuda have been shouted from the rooftops – literally.

The generations-old tradition is one of the sister isle’s many unique quirks and a nod to nostalgia.

Self-proclaimed ‘town crier’ Ordrick Samuel has disseminated everything from political bulletins to death notices for 40 years through speakers attached to the roof of his Codrington home.

Sometimes, he branches out into live interviews, community shout-outs and – when he’s feeling the vibe – a little music too.

Unfortunately for Samuel, not everyone is so enthused.

Neighbours say the “deafening” noise is a public nuisance which can be heard up to two miles away, shattering the otherwise peaceful ambience.

And a few have even launched a lawsuit in a bid to shush him.

Samuel tells Observer his aim is to fill a media void.

“I first started around 1980; I took over from Mr Askie who was doing it from the 1950s. I thought it was a good thing for Barbuda, keeping people informed about things like developments, workshops and public meetings,” he explains.

“I’m on air for around half an hour in the morning depending on the topic. If I’m doing history or political affairs I go on for an hour, but that’s seldom.

“I like to send two songs to housewives and homemakers every afternoon for around 20 minutes to make them feel appreciated. And I do interviews too, such as with officials from the disaster office or tourists.

“The thing I love is helping my people – the satisfaction of getting important information to them,” Samuel says.

The 63-year-old former senator claims fellow villagers rely on his 7am broadcast to get to work on time.

The occasional advertisements he reads out help pay his bills, he explains, and he in turn pays taxes to the Barbuda Council for the right to air his announcements.

That’s of little consolation to his next door neighbour Leicer Davis who says she is fed-up of the frequent blare.

“He needs to stop, I am sick and tired of it and I can’t deal with it no more,” Davis tells Observer.

“I am his neighbour for years, I understand he needs to advertise but he can’t just be on air all the time with kids around.

“Sometimes he is on for three hours in the morning and again in the evening. Sometimes you have to call and say, remember people live here.”

Davis is one of a handful of local residents backing the civil lawsuit to force Samuel to limit his airtime.

Another resident Adrian Lee says while the broadcasts play a key role in times of emergency, he resents having Samuel’s “opinions” forced on him.

“Unlike the Barbuda Channel, you can’t switch it off. The kids are relaxing, studying and suddenly – boom. His public announcements in the afternoon are the only useful purpose. In the early morning it’s just a nuisance,” he says.

Dr Nick Fuller, who recently took on a six-year lease for a property adjacent to Samuel’s, says a sound expert he commissioned to test the volume of the broadcasts had declared it to be injurious to health.

A letter seen by Observer, signed by an electronics engineer, states that the sound levels at Dr Fuller’s Barbuda accommodation “well exceed” guidelines by both the World Health Organization and local police.

“I am taking him to court for a second time,” Dr Fuller says. “We went to the magistrate’s court two months ago and were told to work it out between us.

“We had a meeting between our lawyers and agreed that he would broadcast from 9am to 9.15am on weekdays only. Two days later he was back on for two hours in the morning and two in the afternoon.

“I am now heading back to court with some neighbours to get an injunction against him.”

Dr Fuller says the noise is “tolerable” at properties further away but at the home he planned to use as a retreat for himself and his family it is so intense “the windows vibrate”.

“I spent $120,000 on the property so myself and my family could enjoy it. I had planned to rent it out on Airbnb but you can’t live in it because of the noise,” he says.

Dr Fuller says the specialist who tested the volume found it to have an average of 90 decibels.

“You hit 85 decibels and you get permanent hearing damage. The highest it has been is 101; that’s louder than a motorcycle outside your bedroom window,” he adds.