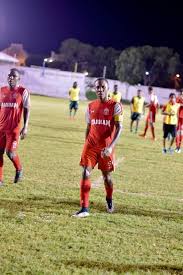 Following his win in the United Progressive Party’s Primary for the St. Peter constituency, national footballer Tevaughn ‘Peter Reds’ Harriette says he has no interest in hanging up his boots.

Harriette who came up against youth politician and award-winning entrepreneur, Chaneil Jackson-Imhoff, and the 2018 candidate, Colin Isaac, won convincingly at the Pigotts Primary School this past Thursday, with a total of 65 votes compared to Isaac’s 23, and Imhoff’s 20.

Despite it all, the Parham native says that he will continue to represent his home team on the field.

“I will continue to play locally as time permits. I will never leave Parham football team stranded,” said Harriette.

The 25-year old striker further shared what influenced him to step into the world of politics.

“The outcry of the people. The people in the St. Peter constituency have been looking for a leader that’s present, not one who will pop up only during the election [season]. As someone who grew up in the community, I understand the struggle.”

He believes it is because of his strong ties to the community that he emerged as the new candidate.