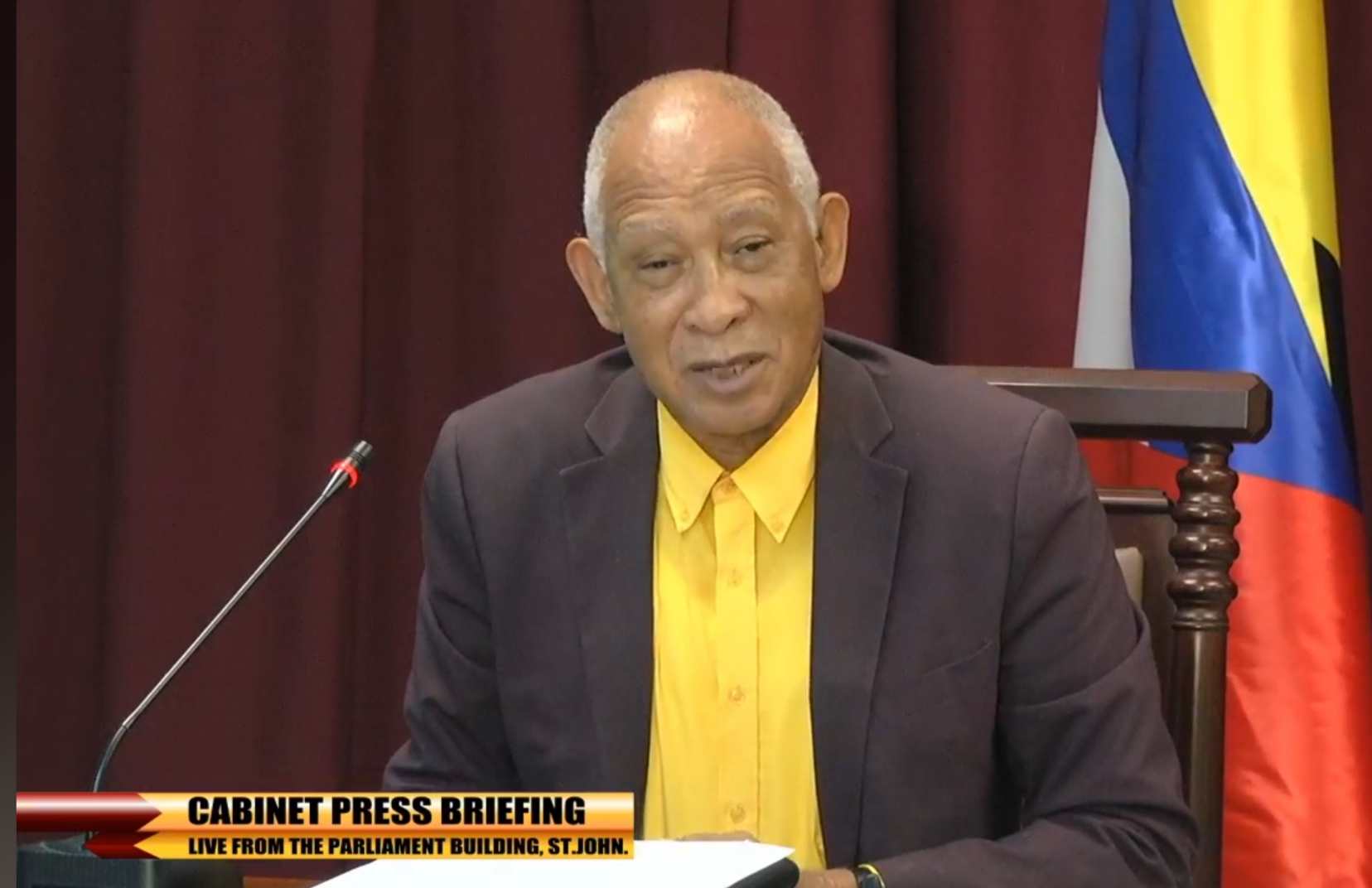 The Cabinet met for almost 7 hours, both virtually and face-to-face; nine members were present and four attended using virtual means. The practice over these past 7 years of the Gaston Browne-led Cabinet is to invite experts and officials to the Cabinet meetings in order to enhance the executive body’s decision-making. Three groups were invited to Cabinet today.

i. The CMO pointed out that the number of infections across the country continues to increase, principally carried by asymptomatic people who spread the virus unknowingly to vulnerable others with whom they interact, without obeying the protocols.

ii. The number of hospitalizations and deaths has risen because the very sick wait until they are deathly ill to seek medical help; very frequently, the very sick also suffer co-morbidities that complicate their Covid-19 treatment. Several illnesses were identified including elevated blood pressure; or, the sick persons may have received other vaccinations recently; or, they may have allergic reactions to certain drugs. The CMO urged those people who are ill to seek out medical attention early, especially if older than 65 years.

iii. The CMO also indicated that “contact tracing” has been strengthened in order to ensure that the probability of infection-spread is decreased. Those who are traced may be asked to isolate or to come to the MSJMC Covid Center for testing. The CMO indicates that every effort is made to get the results (negative or positive) quickly to the contact-traced persons, in order to propose the appropriate treatment. Swabbing is being carried out by 2 teams, in order to increase the number tested daily.

iv. Since vaccination started, 5,400 adults have received the AstraZenica vaccine provided by the Dominican (5,000 doses) and the Indian (40,000) Governments. Four sites—the Villa and Glanvilles Polyclinics, the Multipurpose Center, and the Sir Novelle Richards Academy—are now reporting the daily count of persons vaccinated as high as 600 in one day. The figures have not yet been disaggregated, but those most at risk—the elderly over 65 years—ought to be vaccinated first, the Cabinet agreed.

v. Hence, going forward from Thursday, March 4, 2021, only those men and women 65 years and older, will be vaccinated. The process of vaccinating those who sought the jab improved significantly today, Wednesday, it was reported by the POSRO; but, limiting the vaccinations to those 65 years and older will improve the daily operation system-wide.

vi. The CMO reported that smaller teams will be vaccinating certain Government workers at their worksite. The Clarevue Hospital, the Hospice Center, the National Solid Waste Authority, the APUA, the FSRC, the ABAA, the ABS Staff, the Teachers, Persons with Disabilities, High Court workers, the Police and other uniformed bodies, H.M. Prison, will receive vaccines on Wednesday, Thursday and Friday next week. The list is not exhaustive, the CMO pointed out; workers ought to consult their supervisors and Permanent Secretaries for availability. Hotel workers, Funeral Home workers, and other non-government bodies will also receive their vaccines on the weekend and next week. The situation is very fluid.

2. The Medical Director of the MSJMC pointed out that the global demand for the COVAX supply of the AstraZenica vaccine is extremely high. The PAHO/WHO has not yet been able to provide a precise date of delivery; however, every payment has been made in order to ensure that there is no reason to deny Antigua and Barbuda her share. COVAX is to provide 40,000 doses of that AstraZenica vaccine.

ii. There have been 17 deaths thus far. Many of the elderly who arrive on the doorstep of the MSJMC were dehydrated; several were also malnourished; and most suffered from other co-morbidities. Several sick people who have been presenting late, had been utilizing and applying local bush remedies and potions in an attempt to have the effects of the virus disappear magically. The Emergency Room (ER) saw 50 to 60 patients each night in the earlier period of the pandemic; that average has abated to 6 or 7 patients per night, which is a positive indication.

iii. On the MSJMC Covid Ward, 49 patients are currently hospitalized, several suffering from renal failure which must also be addressed. There are 9 patients in the Infectious disease Center (IDC); seven can now be sent home. Five doctors who worked the ER are sick from COVID; 4 additional doctors are ill, but stable; two doctors are not at work. MSJMC is short on its team of doctors. Even those who are tired are compelled by necessity to continue to work.

iv. There are 17 patients at the former Air Force Base at Coolidge; they are waiting on Covid-19 results, but must remain isolated.

v. Those who are 65 years and older will remain the priority but will be seen exclusively at the centers next week. The Centers are closed on weekends though vaccinating will continue at several workplaces.

3. The Representative of the YIDA Project and the Chairman of the Special Advisory Group reported to Cabinet on their findings following 18 months of examination of the project. A 99-page Power Point display was partially examined by the Cabinet. The Yida Group has been relying on its own capital which has been difficult to extract from its source country. Therefore, every effort is to be made to raise capital by other means. After nearly an hour of discussion, the YIDA Group was invited to return. The group has noted the campaign to discredit it, resulting in bad publicity. More attention is to be paid to its public relations and to share with the Antigua and Barbuda public the progress which the project is making.

4.The General Manager of the Port, the Architect/Planner, and the technician involved in designing the Dredge Bay Port Project reported to Cabinet on the plans that are being readied to transform the 10 acres of newly-created land, on the north side of Rat Island, into a hub of economic activity.

i.The site will also be used for domestic and regional ferries that will discontinue their use of the High Street Ferry Port; there will also be shops, restaurants and a small hotel constructed on the reclaimed land. Pleasure craft will also be encouraged to use the safe harbour, and several slipways will be developed to allow for the mooring of craft. The rum distillery that has owned and occupied land at the Rat Island site is being incorporated into the plan, along with a new road that will lead to and from that site; and, parking facilities for about 100 vehicles is being planned.

ii.The plan has not yet been costed; however, that exercise along with the profitability of the development will form the second stage of the plan to be assessed by the Cabinet. The executive body applauded the team for the magnificent planning that it presented.

iii.The General Manager of the Port also reported that fewer vessels will, in the near future, be calling at the Port as shipping lines consolidate in the face of the pandemic. More container cargo will nevertheless be offloaded in Antigua that will thereafter serve as a hub for distribution of containers to its immediate neighbours. A discussion of a regional CARICOM shipping line was also discussed, given the evolving reality. A Cabinet Sub-Committee, led by the Minister of State in the Ministry of Finance, was established to provide leadership and guidance during the special period now facing the state. A 20% reduction in cargo tonnage arriving at the Port is now experienced.

5.The Chairman of Cabinet reported that the Italian philanthroper has already dispatched US$1.2 million required for the purchase of steel and other building supplies; the remainder ($2.9 million) of the entire US$4.1 million, required to build the Annex to the Sir Novelle Richards Academy, has also been guaranteed. Construction will begin almost immediately following the final approval by the DCA. The new building will be readied and furnished by the first week of September 2021, in time for the start of the new school year.

6.The Foreign and Trade Minister reported that:

i.The Carib Beer manufacturer has submitted requests for further concessions; the permission to re-use their bottles, the Carib Beer Brewery asserts, will reduce the waste which other beers incur. They seek some consideration for their environmentally sensitive policy that will reduce the need to use landfill space.

ii.The Indian Government has promised to deliver distance-learning to the UWI Five Islands Campus, teaching I.T. skills to the youthful students. The Indian Institute of Technology has been one of the success stories of the newly independent India in 1947; it now exports Indian engineers and program writers around the world, and especially to the United States. The Indian Government is planning to share its expertise with the Antigua and Barbuda higher institutions of learning.

7.The Minister with responsibility for Technology informed that his Ministry is in negotiations with another Call Center whose principals have announced that they will employ more than 300 workers who can be trained to work from their homes. The firm has a workforce of hundreds of thousands around the world, and can begin operations in June 2021 if the conditions are right. The terms and concessions are currently being negotiated.

8.The Minister of Education, Sports and the Cultural Industries noted that:i.the first T-20 game will commence at the Coolidge Cricket Grounds between Sri Lanka and the West Indies at 6:00 pm on Wednesday night, March 3, 2021. There will be no live audience but the television coverage will be global, covered by ESPN.Schools will not reopen to accept students until the start of the third term in April 2021.