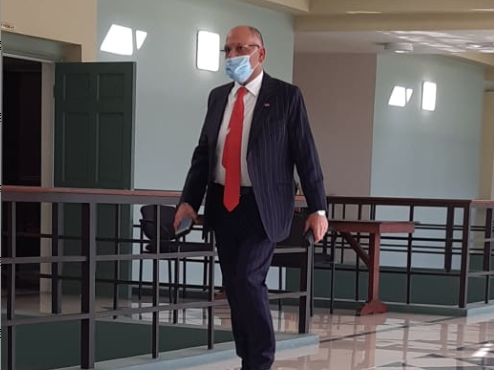 In September, Michael called Observer’s on-air programme – The Snake Pit- where he made a number of accusations against the head of the party, Prime Minister Gaston Browne, and even challenged the party’s leadership by calling for a convention to be held.

As a result, the ABLP’s tribunal issued a letter of notice and charged Michael for what it termed unacceptable behaviour as determined by the party’s constitution.

However, Wednesday’s ruling means that the ABLP is restricted from continuing with the proceeding and is also not able to put into effect any disciplinary decision that it might have made regarding the MP’s actions.

When Observer spoke with Michael outside of the court house yesterday, he said: “I’m very, very happy that the judge ruled in our favour to grant the restriction that no further action can be taken by theAntigua Barbuda Labour Party in terms of proceeding to set up the tribunal which is really and clearly illegal and unconstitutional and not set up properly, according to the constitution of the Antigua and Barbuda Labour Party”.

Michael and his legal team filed an application for administrative order and interim relief against the ABLP Chairman Mary-Claire Hurst on November 2, asking the court to rule that the tribunal should take corrective action, or to stop it from proceeding with any action against him.

In the application, they argued that the tribunal was unlawfully constituted, that its decision to take action against the MP is tainted with bias and that the action of the party breached his constitutional rights. Michael also sought compensation, which the court did not grant, and judicial review which it refused because the application was filed for a public entity and not a private entity which the court recognisies the ABLP as.

Michael’s legal team had argued that the law has evolved to include private law claims by entities that carry out public functions while the ABLP contended that the law quoted spoke to public law applications and not to private bodies like itself.

In the end, Judge Phillip ruled that there was no basis to challenge the validity of the tribunal’s action (grant juridical review), citing that the application did not qualify as a public matter.

“We always knew that there were two schools of thoughts – whether the application fell in the ambit of public law or private law and there were arguments put forward by my lawyers that the law has evolved in the Caribbean that political parties and members of political parties also hold public offices, so you can bring application for a private entity which is not a public entity like the Antigua and Barbuda Labour Party – which we sought to do,” Michael explained. Michael’s team will now have to submit a private claim to support its case against the tribunal. A case management date will be announced after his team files the appropriate claim within seven days.