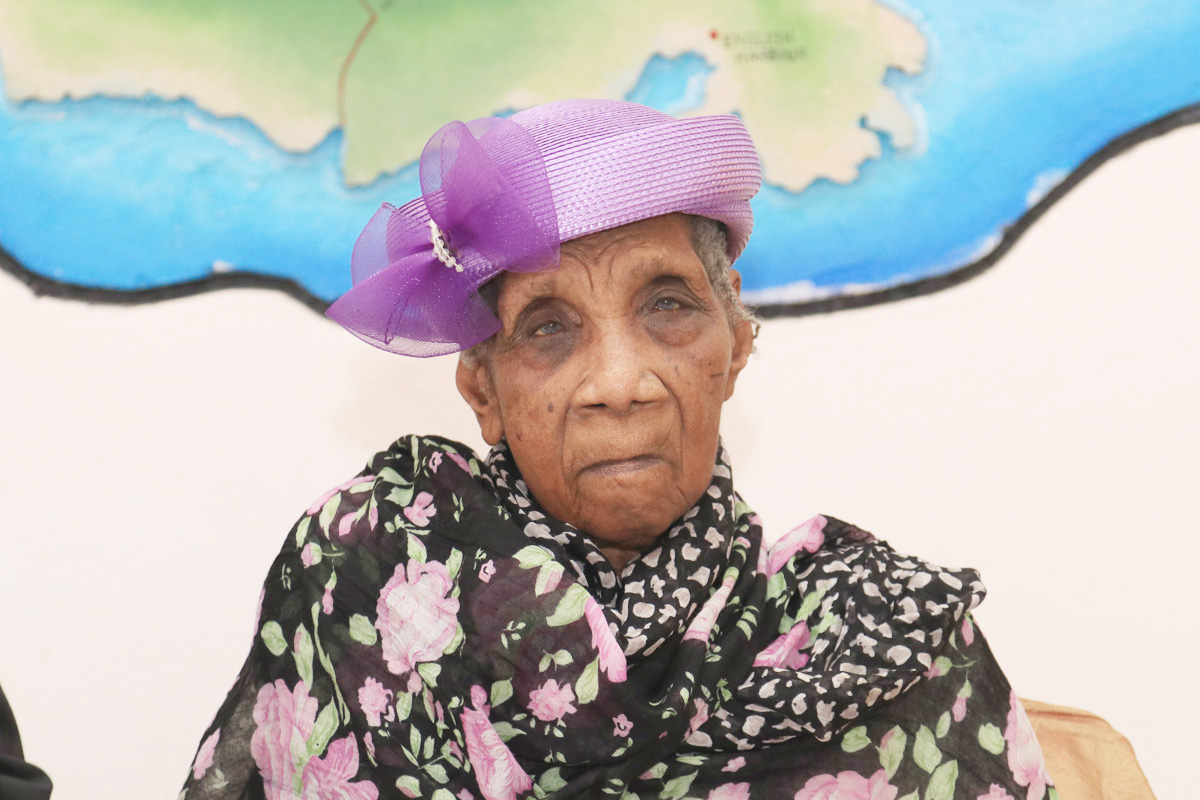 Biography and photos by the Ministry of Social Transformation

Lovely Jane was born on January 19 1920 at George Street in Plymouth, Montserrat.

Her mom was Amelia Lambert, also known as “Tooksie”, and her father was Ben Lee. Ben left Montserrat to seek fortune in the Dominican Republic and never returned.

His parents, Jane’s grandparents, always told Jane he would come back and gave her a picture of him (which Tooksie subsequently destroyed years after in a fit of frustration), so Jane knew no father.

Jane was the first of Tooksie’s eight children and she was assigned the task of looking after her siblings, who are all now deceased.

In 1937, at the age of 17, Jane migrated to Antigua with her mother’s friend, Viola Nedd from Barbuda, who was visiting Montserrat and who lived in Cedar Grove. She came to Antigua to spend time and to help care for Viola for a while. When it was time for Jane to return, she landed a job as a domestic helper and she chose to stay in Antigua.

She became a professional at her discipline and was able to juggle the tasks of the kitchen, laundry and housekeeping and managing the children from babies to kindergarten.

In 1942, she married the handsome Craddy Gould, who had actually travelled to Montserrat to ask Tooksie for Jane’s hand in marriage, and this marriage lasted 49 years until his death in 1991. The couple lived at Grays Hill, St Johnston’s Village, and finally at St Johnston’s Boulevard in Sutherlands. Jane had no children.

Through her work as a domestic help, she made strong and lasting relationships with her employers. She often spoke fondly of the Francis family on Factory Road, the Jonases of Potters, and the wonderful Simpson family, also of Potters.

In 1980, at age 60, Jane was employed by Arah and George Derrick of Scott’s Hill and was eventually morphed into their family. Upon Arah’s passing, Jane “hung on” to her daughter Jennifer, and insisted that she work with her. Jennifer then became her employer, stepdaughter and eventual caregiver.

In 2009, at the age of 89, Jane moved in and lived with Jennifer at her Potters home. In 2018 when Jennifer had to undertake extensive travels, she placed Jane at the Bishop John E Knight Nursing Home where she now resides.

Happy birthday to Jane, who turns 101 today. God’s richest blessings are wished for her.