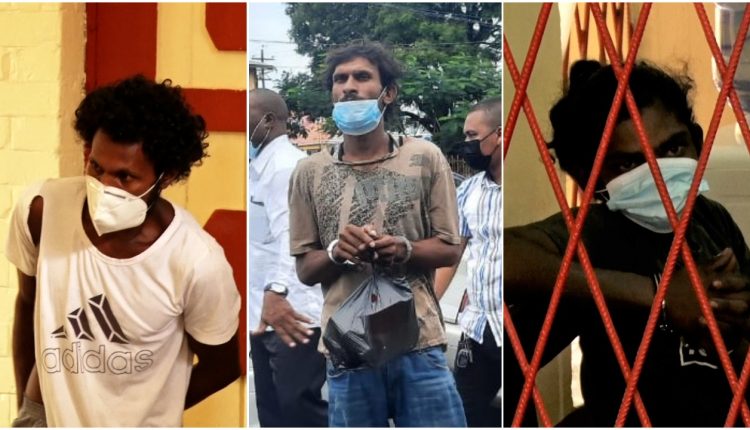 Three men who are accused of the brutal murders of teen cousins, Isaiah and Joel Henry, appeared before Magistrate Peter Hugh at the Georgetown Magistrates’ Court on Friday.

Sancharra and Gopaul were charged jointly while Singh was charged separately with two counts of murder. It is alleged that they murdered the cousins between September 5, 2020, and September 6, 2020, at Cotton Tree Backdam, WCB.

The trio did not have legal presentation; they were not required to plea to charges and were remanded to prison until February 2, 2021, when the case will call again at the Blairmont Magistrate’s Court in Berbice.

Singh gave his professions as a fisherman, while Gopaul said he is a labourer and Sancharra said he is unemployed.

The three men were reportedly nabbed after an informant went to the police.

Singh had allegedly told his relatives and another person about the crime and his role in it. One of the persons he told informed the police and Singh was then arrested at his Zeelugt house and later told detectives of the others who were involved.

He told detectives he and the others were planting ganja in the Berbice backlands but some others, who were also planting, accused them of destroying their “weed.”

On the day in question, Singh said they were at their camp when the Henry boys, both in short pants – one wearing a white shirt, the other a blue – were passing.

He said it was at this point that “Magga” fired his cutlass at the Henry boys, and “Rasta” followed. Singh claimed he was threatened by “Magga” and “Rasta” that if he didn’t join in, they would kill him.

As a result, Singh said he joined in chopping the boys.  He said that they then decided to remove the bodies from the area, doing so on a horse. Singh said it was “Magga” and “Rasta” who took the bodies out and he did not see where the bodies were dumped.

Singh said the area camp where the murders occurred was set on fire. Singh took the police to the location.

The breakthrough in the case comes almost four months after the murders of the teenagers. The police and the government have been under pressure by the relatives of the boys and the public to solve the crimes, which sparked violent protests throughout the country.

There was also a push for an Argentine Forensic team to offer assistance but authorities recently revealed that the FBI has been assisting.

The mutilated bodies of Isaiah, 16, and Joel, 18, were found in the Cotton Tree backlands, West Coast Berbice on September 6, 2020. The killers carved out a huge ‘X’ on Isaiah’s head while they cut open Joel’s chest.

The cousins had left their Number 3 Village, West Coast Berbice home to go into the backdam to pick coconuts on September 5 and that was the last time they were seen alive.

A Post Mortem Examination (PME) found that they both died from haemorrhage and shock due to multiple incised injuries including severed spines. Approximately 27 persons were arrested during the course of the investigation but all were released due to lack of evidence.

On September 14, 2020, the police determined that the boys were murdered somewhere else and then dumped in the backlands of Cotton Tree. Mass protests erupted following the killings. (newsroom.gy)