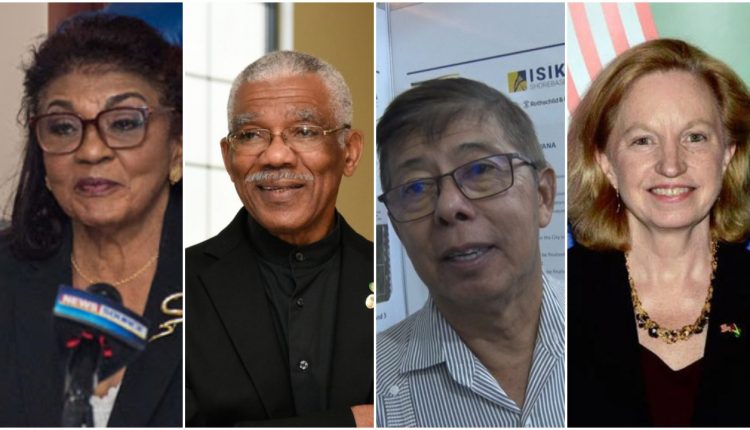 (newsroom.gy) – Minutes after news broke of an unofficial petition seeking to solicit the resignation of the Chairperson of the Guyana Elections Commission (GECOM) Justice (rt’d) Claudette Singh, several individuals and groups have countered it by publicly expressing their confidence in her.

On July 14, President David Granger had made it clear that he has no plan to remove Justice Singh from her post. In a statement, Granger had reiterated his commitment to abide by and respect any declaration made by the Chair.

“President Granger has repeatedly said and demonstrated that he respects the integrity and autonomy of the Elections Commission and that he would abide by any declaration that the Chairman makes in keeping with the laws of Guyana.”

But it has become a norm for agents within the President’s own party to go against his public commitments and while some observers believe that Granger is being undermined, others say he is the intellectual author behind much that is happening now.

This was clearly evident on Sunday when former APNU+AFC Parliamentarian Jermaine Figueira publicly called for Singh to resign on his Facebook page.

“She should do the honorable thing and step aside for Guyana’s sake. The recount produced fraudulent results,” Figueira posted.

Additionally, the unofficial petition calling for Singh to resign first surfaced on Facebook on Saturday and is believed to be signed by supporters of the APNU+AFC.

“We request, nay plead, that you now do the honourable thing and resign and release the people of Guyana from a prejudiced and biased Chairman of GECOM.

“We are unprepared to allow you to continue serving as GECOM Chairman and offer you an opportunity to depart peacefully. Should you resist, we will pursue every lawful means of effecting your removal,” the petition reads.

Those Coalition supporters have been staging several protests calling for Justice Singh’s removal since she indicated that the Commission will be using the certified results of the national vote recount to declare a winner of the March 2 General and Regional Elections.

Those results show the PPP beating the APNU+AFC by more than 15,000 votes.

But one of the Coalition’s most recognised supporters and former PNC Parliamentarian, Stanley Ming has expressed his confidence in the Chair, noting too that attacks against her are “reprehensible and totally unwarranted.”

“She has attained her status, as a highly respected member of the legal establishment, through years of hard work and dedication to her profession, and is unlikely to compromise her honesty and integrity, at this juncture of her life, for anyone,” Ming wrote, in response to allegations that he was behind an attempt to “besmirch” the name of Justice Singh.

Much like the APNU+AFC, Ming has alleged irregularities in the elections, noting that Guyanese went to the polls with a “bloated list” of electors.

Meanwhile, one of the new parties which contested the elections – The New Movement – also came out in defence of the GECOM Chair.

“Keep the faith, TNM stands for you and not against you. We leave this quote with you by Rosa Parks, ‘You must never be fearful about what you’re doing when it’s right,’” the party said.

TNM said it was cognizant of those “disheartening statements and antics” which have been directed at Justice Singh by protesters of the APNU+AFC.

The party added that Guyana is looking to her as it anxiously awaits a declaration of the winner of the elections, based on the certified numbers of the recount.

“Madam Chair, TNM wants to encourage you to remain in high spirits for the end is near. The task ahead is great and only a substantial person, like you, can take it head on,” TNM noted.

Additionally, United States Ambassador to Guyana Sarah-Ann Lynch on July 16 also spoke in defence of the Chair, as supporters of the Coalition ramped up its attacks.

“I am shocked and appalled at the dangerous statements and actions that I have seen directed at the Chairwoman,” Ambassador Lynch told reporters during a virtual press conference on July 16.

“Chairwoman Singh is a person of the utmost integrity and a distinguished jurist who has given decades of her life in service to her country.  I hope that all Guyanese will speak out on her behalf and allow her to continue her work and bring this electoral process to closure,” the diplomat added.