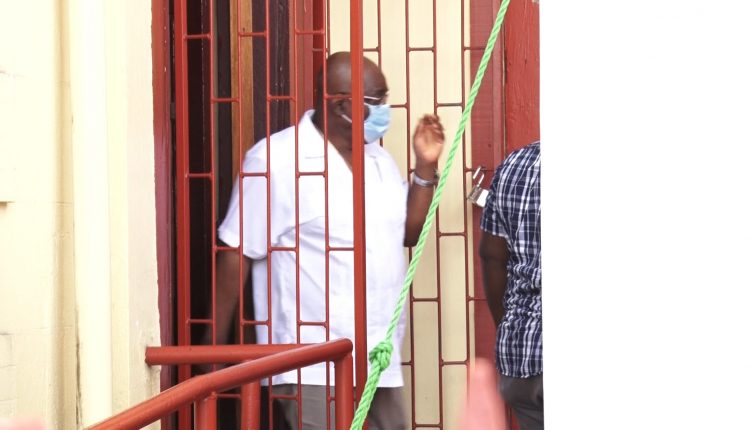 (newsroom.gy) – The case filed against the Chief Elections Officer Keith Lowenfield has been postponed until August 24, 2020, as lawyers are awaiting a decision from the Director of Public Prosecutions (DPP) Shalimar Ali-Hack on whether she will agree with submissions made by counsel to drop the charges against him.

Lowenfield’s lawyer Nigel Hughes had written the DPP asking for the private criminal charges to be dropped in accordance with the same courtesies extended to the Chairperson of GECOM Justice (ret’d) Claudette Singh.

It was the DPP who recently decided to drop all charges against Singh.

Lowenfield made his second appearance at the Georgetown Magistrates’ Court on Friday before Magistrate Faith McGusty where lawyers representing the applicants were expected to present their statements.

But Attorney Sanjeev Datadin, who is one of the Lawyers representing the applicants noted that it “will be imprudent to go ahead” with the disclosure of statements when it is unclear whether the case will continue.

He told the News Room that the DPP has since asked his team to submit their file following which she will make a decision.

The charges against Lowenfield were filed on June 30 by People’s Progressive Party (PPP) member Desmond Morian and Member of The New Movement, Daniel Josh Kanhai relating to fraud, misconduct in office and breach of the public’s trust by providing results of the March 2 elections which he knows to be false.

In charges filed against the CEO, it is alleged that between March 5, 2020, and June 23, 2020, Lowenfield conspired with person (s) unknown to commit a common law Fraud, “to wit, by presenting to the Guyana Elections Commission, the tables attached to his Elections Report dated 14th day of March 2020, accurately reflected the true results of the said election, in order to materially alter the results of the said election, with intent to defraud, knowing the tabulation to be false.”

As a result of Mingo’s fraud, GECOM embarked on the national vote recount following which Lowenfield in his summary provided a table which revealed the totals for the ten electoral districts which were signed off by GECOM’s own staff as being valid; when added up, Lowenfield’s report shows the PPP winning the elections by 15, 416 votes.