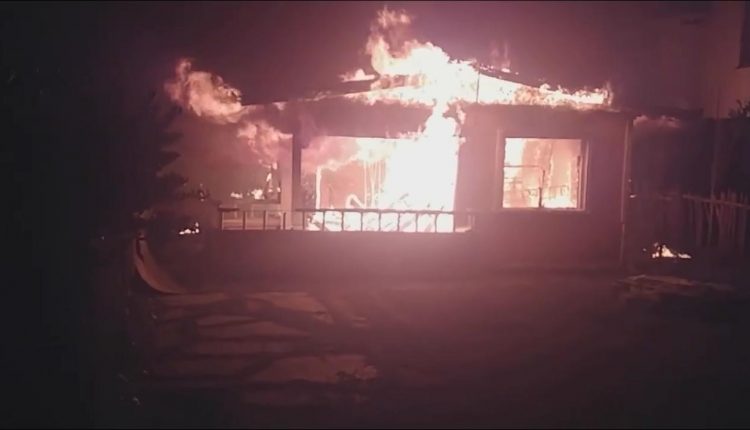 One house was completely destroyed at Number 22 Bel-Air Village, West Coast Berbice on Tuesday night while a barbershop was also set alight at Number 28 Village.

Sharon Hiralal told the News Room that her brother, who owned the property, was not at home at the time. The family remains puzzled at the destruction of the property; they have been occupying the house for over three generations.

The fire was lit a short distance from where protesters blocked the roadways at Hopetown.

Meanwhile, a young barber is contemplating his losses as his only means of livelihood was burnt to the ground.

The barber, Kevin Pitam, 30, resides at Bush Lot but his barbershop is located at Lot 328, Number 28 Village Public Road.

Pitam told the News Room that at around 22:00 h he received a call that some protesters were breaking the shop and moments later they removed it and then set it ablaze.

The young barber said there were attempts earlier in day to burn the barbershop but a friend pleaded with the protestors not to do so.

“I am very sad over all this, I haven’t been able to go make a report to the Police yet since the road is still blocked. I call them last night and they said they can’t take a report over the phone. I never thought something like this would happen,” the distraught barbershop said.