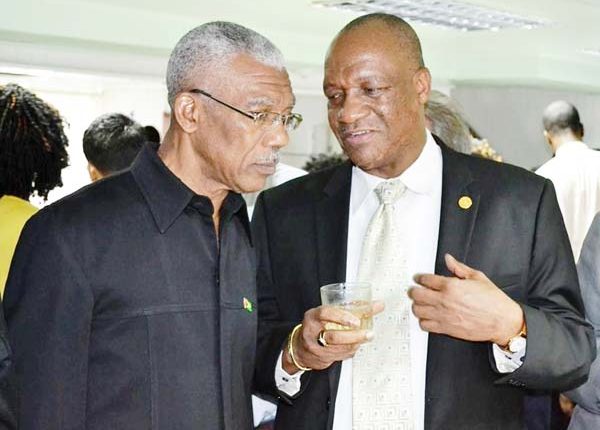 (newsroom.gy) – The incumbent APNU+AFC has rejected calls from local and international observers to concede defeat at the March 2, 2020 elections with its Campaign Manager Joseph Harmon making it clear Sunday that it is the “most ridiculous and nonsensical proposition.”

During his appearance on 104.3 Power FM, Harmon reiterated the Coalition’s support for the recent reportof the Chief Elections Officer, Keith Lowenfield, which gives it a victory and dumps over 115,000 votes.

“So there you have it – a report in the Elections Commission showing all the valid votes = and still people are calling on Mr [David] Granger to concede. Concede to what, concede to who? What is he to concede to?

“It appears to me and I venture to say, any right-thinking person to be a most ridiculous and nonsensical proposition,” Harmon said Sunday.

On Friday, a powerful group of the U.S. Senate called on President David Granger to honour the will of the Guyanese people and concede defeat.

They said a declaration of the winner of the elections must be based on the national vote recount scrutinized by CARICOM.

The Kingdom of Norway, the Commonwealth, the Organisation of American States (OAS), CARICOM, the British and Canadian High Commissioners, the United States Ambassador, the European Union, the Elders Group and other international and local observers have urged President Granger to “do the right thing” and concede.

But Harmon on Sunday said Guyanese are waiting patiently for Granger to be sworn in.

“Our people have been waiting for over 119 days for their President to be sworn in and it has taken a toll on their patience.

“When you add the COVID-19 restrictions to this, one can understand the anxiety of the Guyanese people to have President Granger sworn in.

“I will caution all persons who have been influenced or encouraged by others to make statements which are prejudicial to the outcome…that I ask of you to refrain from doing so,” Harmon emphasised.

It has been 118 days now since Guyanese went to the polls and to date no winner has been declared even after the Guyana Elections Commission (GECOM) embarked on a 35-day recount and certification of all votes cast.

The recount results show that the Opposition People’s Progressive Party has won the elections by 15,416 votes.

But Lowenfield’s latest report gives the APNU+AFC Coalition a victory with 171,825 votes.

In his first report, based on official figures from the recount, Lowenfield certified that there were 460, 352 valid votes but recently reduced that figure to 344, 508. That’s a difference of 115, 844.

But despite President Granger previously committing to accepting the recount results, he has refused to accept defeat and has since embarked on a campaign to claim electoral fraud without providing evidence.

The recount exercise was supervised by a high-level three-member CARICOM team which has since determined that the recount results are “completely acceptable” and that the winner should be declared.

President Granger had described the CARICOM scrutineers as the “most legitimate interlocutor” in the Guyana elections but since the CARICOM report was released, he has not addressed the media or the nation.