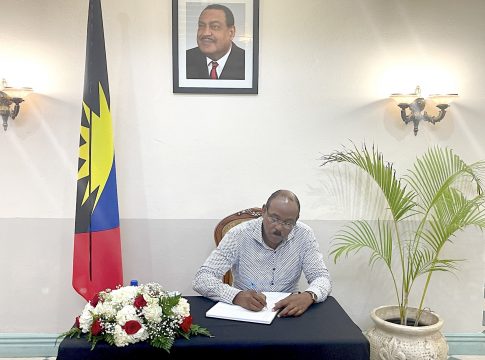 “Sir Lester’s contribution to the socio-economic development of our country is second only to his late father, Sir Vere. I trust that the sterling contributions of Sir Lester to our country will help to assuage the pain of losing him.

“His memory will be permanently etched in the hearts of our people,” Prime Minister Gaston Browne wrote in the Book of Condolence, which was opened on Wednesday in the Office of the Prime Minister.

According to a release, attorney General Steadroy Benjamin, a former Cabinet colleague of Sir Lester during his tenure as Prime Minister, also wrote, “A true politician and leader who laid the foundation for modern Antigua and Barbuda.

“A man who had a positive impact on my personal development and taught me all of the intricacies in politics. His humility, love of and for the people is a shining example of the positive elements of his life that I seek to emulate.”

Sir Robin Yearwood, another former Cabinet colleague of Sir Lester, also recorded how he felt on hearing of his passing.

“It was with sadness I received the news that my friend and former PM had died. Lester and I were personal friends. We chatted, laughed and enjoyed ourselves.

“His passing will bring sadness to our nation. Lester had made his contribution to nation building. He cared for his people and at times was considered a friend to all people. I will remember him for the rest of my life,” he wrote.

Meanwhile, Minister of Agriculture, Samantha Marshall, whose father Hugh Marshall served with Sir Lester, wrote that, “Sir Lester will continue to be the giant of a leader in the minds of many including me. You were an integral part of my Dad, and by extension our family’s life. You were born to serve, to serve in sports, in law and in governance. Thank you, Sir Lester, your legacy will live on for many years to come.”

“Sir Lester Bird was undoubtedly the architect of modern Antigua and Barbuda. His vision for Antigua and Antiguans transcended several generations. Even more importantly, he was the consummate Caribbean man.

“His leadership in Caribbean politics encouraged our peoples to come together. So we mourn today – indeed for a long time – the loss of a true Caribbean icon,” wrote Tourism Minister Charles Fernandez.

“The death of Sir Lester, our National Hero, is a personal and professional feeling of losing a mentor and a motivator. Sir Lester was the one who paved the way for me to become a public servant and guided my political career,” he said.

Education Minister Daryll Matthew also reflected that “throughout history there are great men and women whose contribution to nation building and the development of a people is significant. The contribution of our late National Hero Sir Lester “Brilliant” Bryant Bird to the growth and development of Antigua and Barbuda has been nothing short of phenomenal. Your entry through the gates of Valhalla is assured. You will be missed. Rest well after a lifetime of service to your country.”

The Book of Condolence was also signed by Governor General Sir Rodney Williams who served with Sir Lester and his father Sir Vere Bird Sr.  Lady Williams also extended her sympathies to the family.

“Sir Lester was our National Hero, former PM, husband and father and a citizen with the interest of our nation at heart. Sir Lester lived a full life and his contribution to Antigua and Barbuda will long be remembered by all. We extend sincerest condolences to the Bird family,” wrote Sir Rodney Williams.

The Book of Condolence at the Office of the Prime Minister will remain open for members of the Cabinet, the diplomatic corps and other officials to pen their tributes.