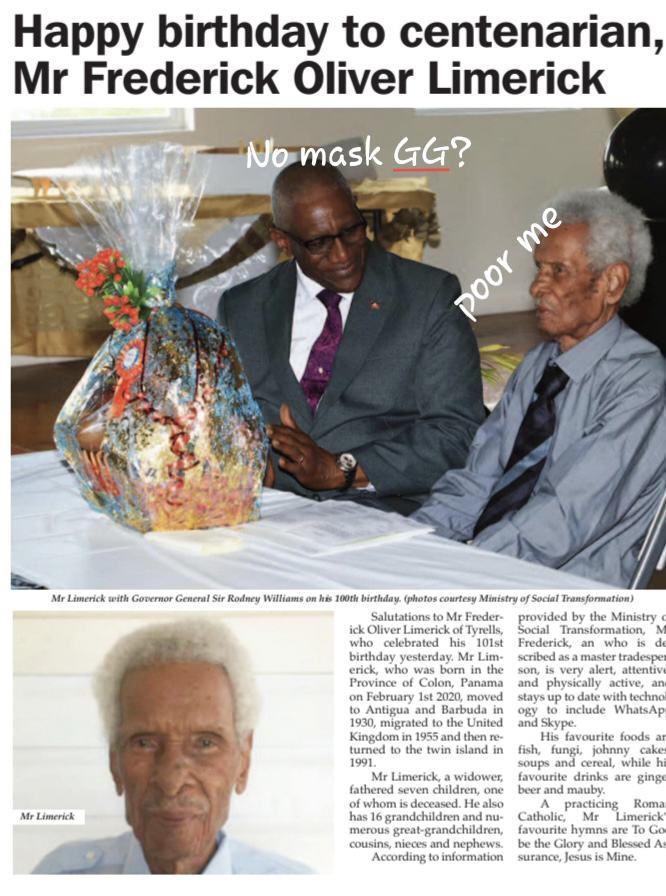 The Office of the Governor General is particularly disturbed by the confusion being spread by persons on social media to a recent article in a local newspaper which featured the 101st birthday celebration of one of our elderly treasures- a centenarian.

“Included in the article is a photograph with a caption which clearly states: ‘Mr Limerick with Governor General Sir Rodney Williams on his 100th Birthday’, which referenced an event that occurred one year ago, on February 1st, 2020,” a release from the Office of General pointed out.

While noting that the World Health Oorganisation (WHO) declared Covid-19 a pandemic on March 11th 2020 and Antigua and Barbuda declared a State of Emergency on March 25th, 2020, it added: “To suggest that the Governor General is not wearing a face mask while visiting a centenarian when face masks were not required at the time when the photo was taken, is not only mischievous and misleading but highly irresponsible.

“This is particularly troubling since the Governor General made a conscious decision not to visit any centenarian during the State of Emergency in light of the elderly being in a high-risk category for contracting the disease.”

The communique reminded social media users that this is the type of miscommunication that breeds anxiety and confusion among the residents in Antigua and Barbuda.

“This is unacceptable. It is not a time to jest. This is the time to protect ourselves and to be our brothers‘ keeper by acting responsibly,” it concluded.