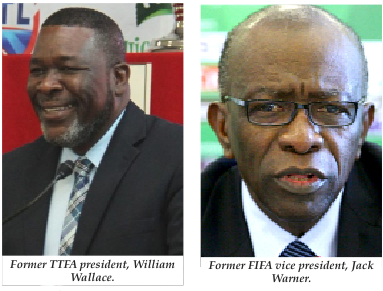 Wallace’s defense comes amidst widespread belief that his perceived relationship with Warner may have led to FIFA’s disbanding of the three-month old executive last week and the installation of a normalizing committee.

Speaking on Observer Radio’s Good Morning Jojo Sports Show, the former T&T football boss said that although his relationship with Warner is purely cordial, he had no control over whom decides to show support for his candidacy.

“That is a perceived relationship and one that I don’t have that when it came to the fore, I wrote FIFA, I wrote CONCACAF indicating to CONCACAF that there is no such relationship with Mr Jack Warner and I guess that if at the end of the day that letter meant nothing then so be it,” he said.

“We had a host of people supporting us and actually, we won the election 26 votes to 20 votes so it meant that 26 of the delegates supported me along with many other Trinidadians who felt at that point in time that something was definitely wrong with the organisation at that point and they needed change so as a citizen of Trinidad and Tobago, even though Jack Warner expressed his opinion in terms of there should be change at the association then he has a right to do that, I really can’t stop him from doing that,” he added.

In 2015, Warner was banned for life by FIFA after the body’s ethics committee was found to have committed many and various acts of misconduct continuously and repeatedly during his time as an official in different high-ranking and influential positions at FIFA and CONCACAF.

Wallace labelled the move by FIFA as premature, given the fact that his association was in the process of putting mechanisms in place to mitigate the ongoing financial issues.

“The decision of FIFA to disband an executive that has been duly elected on the 24th of November. The election was supervised by both FIFA and CONCACAF and that administration is in office only three months now and FIFA decides to close down the administration and the grounds that they put forward are, for us, grounds that are very questionable,” the former football boss said.

“They said there are not internal financial controls in the organisation and you [FIFA] sent a team in during the month of February and when that team came in they actually regenerated the networks. Weeks before that team came in we had written a report that the team got when they came in and basically, what was sent back to us as reason for taking action was that same report verbatim,” he added.

According to the FIFA website, the decision to disband the TTFA’s Board ‘follows the recent FIFA/CONCACAF fact-finding mission to Trinidad and Tobago to assess, together with an independent auditor, the financial situation of TTFA’.

It was previously stated that the TTFA was indebted to the amount of TT $50 million [US $7,457, 720] previous to Wallace and his executive taking office in November last year.

The administrator said his organisation was making progress in its efforts to bring the situation under control.

“Our accounts are now unfrozen and the matter is now out of the courts at this point in time and based on the lack of financial mechanisms within the organisation, we started that process by identifying what the problems were. We already a presentation to the members of the board, discussing the responsibility of the board members and so we were on the way to put those systems in place,” Wallace said.

“In terms of the historic debts which none of it was really our making, we did indicate to FIFA through a memorandum of understanding that we sign with an international company that they were willing to come into Trinidad and Tobago to do a project and in that project, they would have dealt with the TT$50 million dollars in debt,” he added.

FIFA had appointed former T&T Football Association (TTFA) employee Tyril Patrick to lead the local football body before a normalisation committee is selected to run the sport there. Wallace has since said he and the other members of his executive intends to appeal the decision.