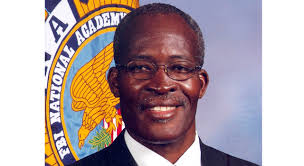 “Discretion by police officers is critical during this time,” posited a retired Assistant Commissioner of Police (ACP) who, along with other law enforcement officials, recently discussed a number of curfew-related incidents where the public and law enforcement have butted heads.

While elaborating his position, former ACP Nuffield Burnett said that although members of the Royal Police Force of Antigua and Barbuda are doing a commendable job in enforcing the regulations adopted to control the spread of Covid-19, more can be done.

“Discretion is a vital attribute for police officers. You must display discretion at all times [and] that is going to be critical going forward in this time, during this current state of emergency that we have here. We see some situations so far where [the police] were a little bit stiff or static and where they could have flexed their discretion a little bit more.

“But as I said, for now we are not doing badly … I am speaking now to the law enforcement that discretion is the primary thing and we need to have that foremost in our minds.”

Another contributor, criminologist and sociologist Dr Peter St Jean, shared similar sentiments but went a step further by alerting police officers that there has been increased incidents of “suicide by police” and that they ought to find a balance.

“Suicide by police” refers to a situation where someone may be suicidal but cannot take his/her own life and willfully puts themselves in harm’s way in order to be killed by the police.

“There are many people now who are facing isolation, people dealing with trauma, and believe it or not, people are interactive beings so persons will begin to act out and police officers have to reassure them.

“There are people who are going to be agitated with police officers and what police officers need to do is decide whether or not to be too light-handed or to be firm in giving people instructions,” Dr St Jean pointed out.

“I would really recommend that we think both about not over policing and not under policing,” he added.

Meanwhile, Sergeant Brenton Smith of the St Vincent and the Grenadines Police Force and a former president of the Caribbean Police Welfare Association, added to the debate by highlighting that the demeanour of officers can either escalate or calm a situation.

This, he said, will not only prevent unnecessary conflict but also aid in keeping officers safe with less physical contact which can put them at risk of contracting the coronavirus.

He pointed out that constant communication between leaders and frontline officers is also necessary during this time.

“I think that the decisions and what instructions are given to the officers must be clear. Otherwise, if you leave it for them to do on their own, you can have some misguided officers doing what they’re not supposed to.

There needs to be constant communication with our officers, especially for the young ones who are going out on the frontline; we need to communicate more with them [and] train them where necessary.

“It is also critical at this stage for the hierarchy of the organisations not to believe that they know it all but to work closely with the welfare associations around the unions.”

A collective effort from the officers and members of the public, Smith says, is paramount during the lockdown.

As indicated in a release from the police, 76 people had been arrested and taken to court for violating curfew restrictions since Antigua and Barbuda mandated the 24-hour lockdown on April 2. That number comprised 55 males and 21 females.