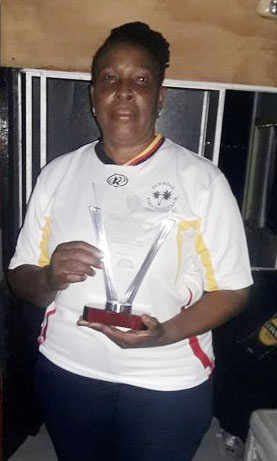 A former national netballer turned coach, Ruby Williams, says that although she is not pleased at where the sport is now, she believes that it is slowly but surely progressing.

Williams is commending her former teammate, colleague and long time friend, Karen Joseph — the president of the Antigua and Barbuda Netball Association (ABNA) — for her efforts thus far in reviving the sport, which at one point had been dormant for more than five years.

“I am not pleased, but I think with Karen’s help she is fighting hard to get the netball league up and more competitive. I think they participated in something in St Maarten and I think either they won or came second, and right now I see they are having a five-week umpire course because we are far behind in that aspect. We are even further back in coaching so, Ms Joseph is trying to uplift that. I do the see the effort,” Williams said on the Good Morning JoJo Sports show last week.

Regarding the vibrancy of the sport in her community of Old Road, she admitted that some work is needed, especially in the administrative and coaching area.

She also added that although she has been stepping up that aspect as she is the coach attached to the school in the community, she is hoping to do more in the future.

“What I think needs to be done now is for me to go back into the community because there isn’t anyone coaching Old Road. I would go out at 8 am to the school and help them out and I brought back a team in the last tournament. As long as I am given the okay, I think I will be extending those sessions in the afternoons as well so I can get even more persons from within the village,” she shared.