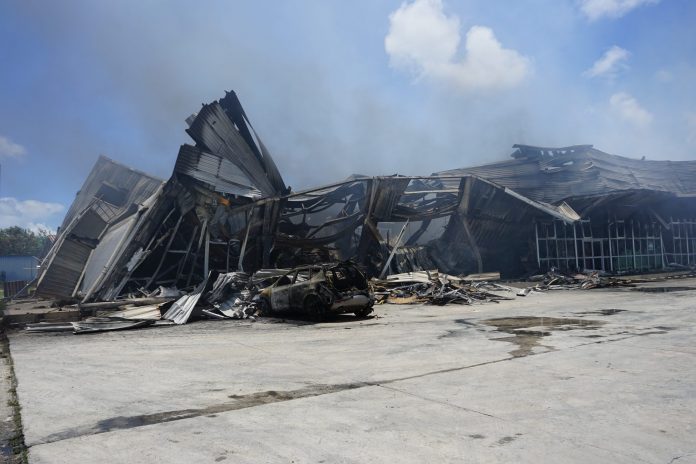 Story and photos by Gemma Handy

A smouldering, mangled wreck was all that remained of one of the country’s largest supermarkets last night, where firefighters were still damping down more than 15 hours after it went up in flames.

The inferno which claimed the XPZ store in Paynters could be seen from several miles away – simultaneously lighting up both the night sky and social media as news of the disaster spread in the early hours of Tuesday morning.

Smoke and an acrid smell lingered in the air yesterday as crowds gathered on Sir Sydney Walling Highway to watch firefighters tackle the mammoth blaze.

Exacerbating its spread was the wealth of flammable items inside – from home insulation materials to alcohol and aerosols – officers at the scene told Observer.

One said dousing the flames had been complicated by the need to clear debris to reach some parts.

Shock at the fire’s sheer scale – affecting not just the store but two adjacent buildings – was a recurrent theme among onlookers. In the supermarket car park, the charred remains of a vehicle could also be seen.

The cause of the blaze is not yet known but arson is believed to be a possibility.

Fire Chief Elvis Weaver told Observer last night it was “too early to say” and that investigations were ongoing. But he had earlier described it as “very suspicious” due to the fact separate structures were impacted.

Four fire engines attended the scene, along with six water trucks from a private business which lent assistance, he said.

“We may have dealt with the intensity of the heat before, but never a building of this size,” Weaver added.

Meanwhile, the company’s dozens of staff have also been left floundering. XPZ is believed to employ 57 workers between the supermarket and a smaller clothing shop in Redcliffe Street, St John’s.

One employee said staff had not heard anything official up to last night from the firm’s management team. XPZ’s owner is said to be currently out of the country.

The employee said the clothing store’s staff had been told not to come to work for the remainder of the week.

A spokesman for XPZ said he was not currently in a position to comment.

The supermarket opened in 2018, selling everything from food and clothing, to children’s toys and household items.