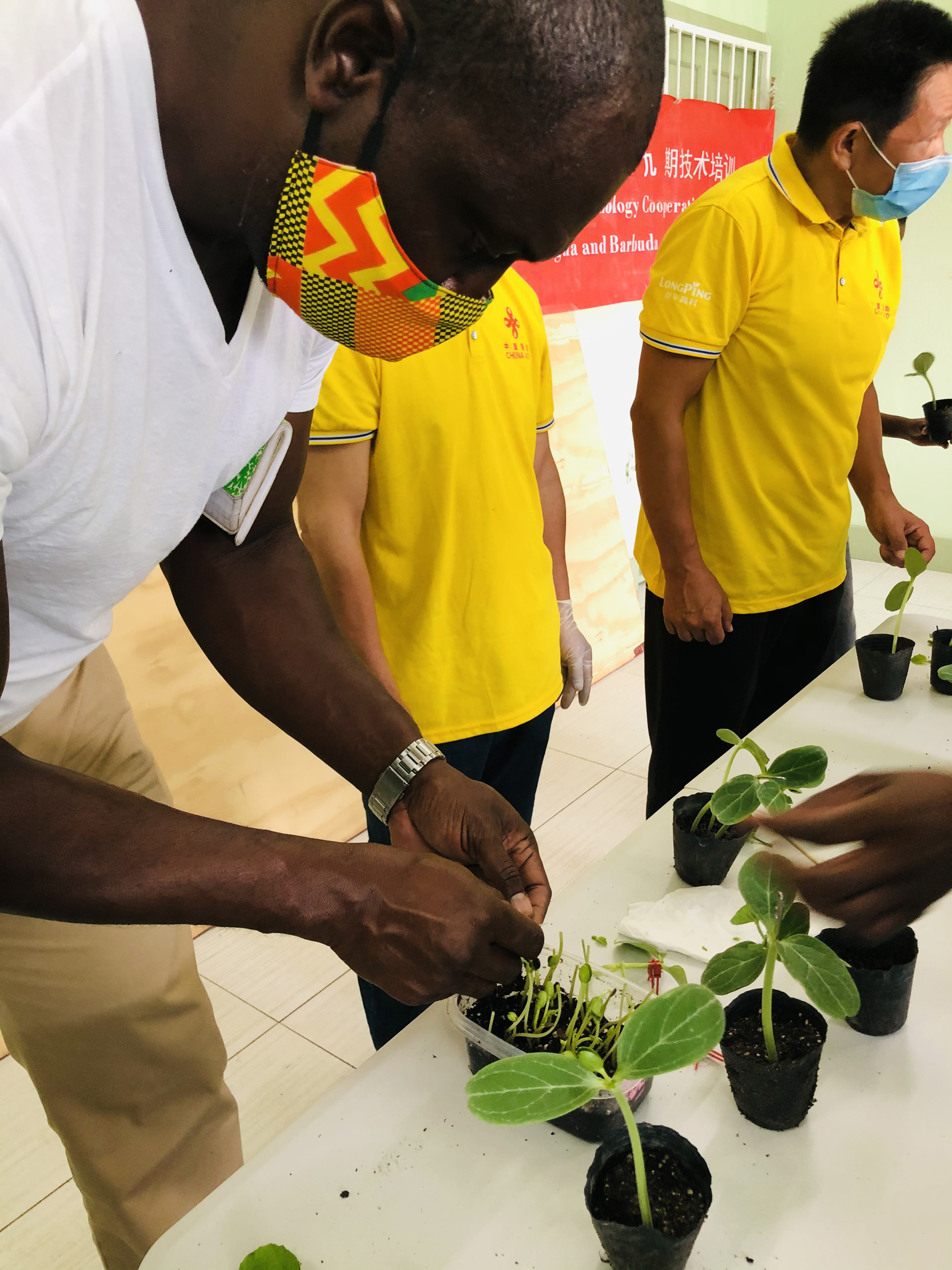 Farmers in the country could soon be reaping the benefits of improved crop production, following a workshop on grafting techniques at the Ministry of Agriculture’s Peasant Development Office (PDO) yesterday.

The workshop – part of the ninth Technical Training of Agricultural Technology Cooperation Project between China and Antigua and Barbuda – focused on specific grafting methods to increase durability and resilience in watermelon, primarily, but also in crops like tomatoes and cucumbers.

Describing grafting as “the most successful and effective solution to [the plant disease ‘blight’]”, Professor Xiao Shuhua used a detailed theoretical presentation to illustrate the various processes involved – noting that issues such as (recent) rainy weather conditions and land limitations, often result in the emergence of the disease.

He explained that – for example – “continuous cropping in [the] same land will cause blight, which “then leads to yield reduction in watermelon cultivation”.

The grafting process, as explained by Professor Xiao, entails the joining of plant tissues using watermelon plant shoots – the scion – and root stock, of which he named gourd, pumpkin and wax gourd as suitable varieties.

The detailed procedure involves making an angled cut at the junction between the rootstock’s cotyledons, removing one cotyledon and the first ‘true leaf’ at its growing point. The scion is then cut at a 45-degree angle, approximately one inch below its cotyledons.

The cut watermelon scion is then matched to the cut stem of the rootstock and the two are clasped tightly together using a grafting clip. The grafted watermelon seedling is then planted in a small container and ‘healed’ in high-humidity, before being covered with polyethylene material.

After a few days, the grafted seedling can be removed from the covering and exposed to a ‘regular’ environment to continue growth. Professor Xiao advised that if the correct procedure is followed, it should result in stronger, more resilient crops that could increase farmers’ yields – when you consider the losses caused by blight.

Along with his presentation, he also did a thorough practical demonstration to show the ‘real-world’ application. Several attendees – of the over 30 that were present – took part in that demonstration, with some grafting their very own seedlings to bring home and attempt a full growth cycle.

Speaking to Observer on the sidelines of the workshop, leader of the project Weng Yong, explained that the overall goal is to assist the Agriculture Ministry and by extension farmers across Antigua and Barbuda, in meeting the demands of the agricultural sector.

“During this two-to-three-year cultivation of vegetables [as part of the project], we have selected many varieties that are compatible with the local climate. [These include] cabbage, corn, sweet pepper, cucumber [and] tomato.

For example, we’ve learnt that Antiguan people like cabbage and corn very much, but some diseases frequently appear in [their] cultivation, so we want to solve this problem,” Yong explained.

He said the next step of the project is to determine what the other demands are and how best they can help to bring these to fruition.

Meanwhile, head of the project on the local side, Senior Extension Officer in the Ministry of Agriculture Owolabi Elabanjo, maintains that the project brings nothing but benefit to the country, despite any negative assumptions.

“What we have seen [yesterday] is one of the technical trainings that we are trying to bring into our production, for farmers to be able to know how to graft melon [and] how to utilise the technologies that are available.

“Our Chinese counterparts have various technologies – more advanced than us – they have the resources, and this is why the Antiguan government signed the China Aid agreement,” Elabanjo said.

The project, which started in April 2018, is scheduled to end in April 2021, though Elabanjo is keen on negotiating an extension.

“We’re hoping that when this programme expires in April, we’ll be able to get something renewed so that we can refocus on some other activities in agriculture, like small tools for our farmers, bringing in more variety of seeds [and] improving our water catchment.”

He also highlighted the importance of backyard farmers, who he credits with assisting the country’s food security greatly throughout the pandemic. They, he added, would be given special attention in any extension of the programme.

“We’re not leaving out our backyard farmers, [so] what we want to see done in our next move is to get a donation or at a reduced cost, [some help] for backyard farmers to improve their hydroponics and using more of the shade net for production in their backyards,” Elabanjo added.