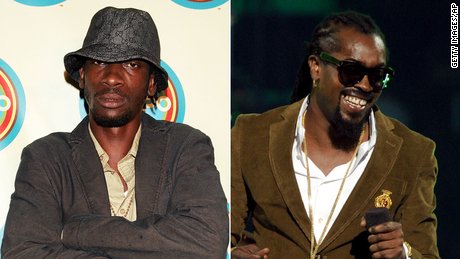 (CNN) – The  latest Verzuz between reggae artists Beenie Man and Bounty Killer was the party everyone expected as the two artists battled in person in Jamaica.

It was the first time two musicians competed physically as the previous Verzuz battles were all virtual.

Reggae artists Bounty Killer, left, and Beenie Man compete against each other on Instagram Live on Saturday, May 23, 2020.

Beenie Man and Bounty Killer came ready with coordinated outfits, each with their own DJs and a dancer.

“This is how we represent the culture … At the end of the day, it’s a musical sport,” Bounty Killer said at the end of the two-hour livestream as he and Beenie Man sang Bob Marley’s “One Love.”

A dancer performs during the Verzuz batttle between Beenie Man and Bounty Killer on Instagram Live on Saturday, May 23, 2020.

“Why my social media looks like this, though?” tweeted author José Vilson with a picture of cartoons twerking.

“THIS WAS THE GREATEST THING TO HAPPEN TO 2020” DJ Puffy tweeted.

“No no, we not stop now” Beenie Man said as the livestream continued for another hour.

Jamaica currently has more than 500 cases of coronavirus, according to CNN’s map tracking cases globally.

Beenie Man and Bounty Killer’s battle was part of an ongoing series by producers Swizz Beatz and Timbaland as a way to entertain fans during quarantine.