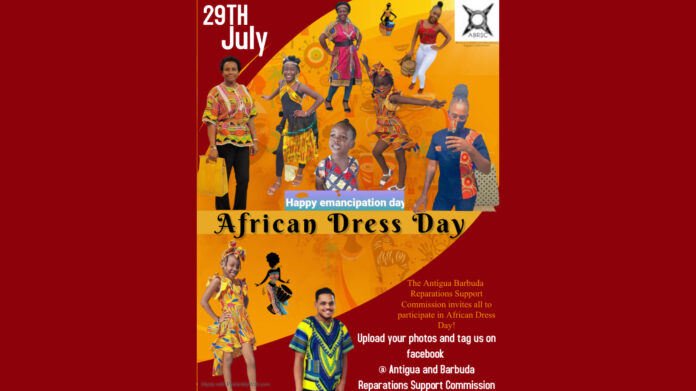 ‘Celebrating African Royalty and Heritage’ is the theme of this year’s Emancipation celebrations which run from July 29 to August 12.

The Antigua and Barbuda Reparations Support Commission said activities will include the hosting of His Royal Majesty King Bhungane III and his wife of the Embo Kingdom of South Africa.

There will also be the 14th annual watchnight gathering, African Dress Day, an exhibition and televised lectures.

“The activities will begin on July 29th with the African Dress Day, a call for all nationals and residents to don their African dashikis and cultural wear, in a show of pride for our African heritage and to honour the ancestors who struggled to ensure our freedom as a nation, the Commission’s Vice Chair Anthony ‘Mamba’ Liverpool said.

“As we commemorate the 188 years since our emancipation from chattel slavery in 1834, the people of the Caribbean have made great strides in our efforts to build and nurture a Caribbean society that has produced world champions and achievers in athletics, cricket, literature, economics and health,” he said.

Celebrations continue with the hosting of the annual Emancipation Day church service at the Green Bay Moravian Church on August 1 and the broadcasting of two special lectures on August 5 and 12 on ABS TV.