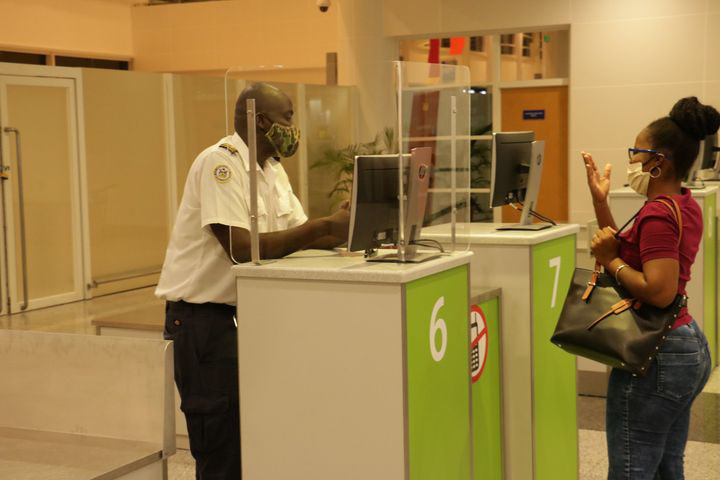 Officials at the Antigua and Barbuda Tourism Authority (ABTA) are meeting with their partners to examine ways to cut wait times for arriving passengers at VC Bird International Airport (VCBIA).

Incoming travellers, according to regulations implemented by the government, are required to complete a number of Covid-19 checks, to include temperature screenings.

One couple who recently returned home via VCBIA, shared that it took them over an hour to complete the process after their British Airways flight landed. They said that although it was very comprehensive, it was too time consuming.

A solution to this dilemma, according to the Chief Executive Officer (CEO) of the ABTA, Colin James, is the focus of discussions, which began on Monday and will continue over the coming weeks.

“We were looking at how can we reorganise the process so when we have those rush hour days on Saturdays, in particular, that we can be expediting and moving our passengers in the best possible way, but at the same time ensure that everyone is checked, that everyone has their Covid negative PCR certification, and that we can move them through the airport.

Since the first case of the Covid-19 pandemic was confirmed here in March, the tourism industry suffered a huge setback as tourist arrivals via airlines and cruise ships quickly ground to a halt.

According to James, Antigua and Barbuda’s tourism industry recorded a 49 percent decline in the ensuing months, but it has been slowly picking up pace after the first commercial flight returned in July.

Just this week, the country welcomed back Virgin Atlantic airlines and James said the current numbers are reflecting at least a 55 percent bookings for hotels for the remainder of the year.

He also addressed the availability of rooms to accommodate guests, saying that over 1,600 rooms are currently available with another 1,000 to come on stream in December. He attributed this to the demand for Antigua as a tourist destination, and which resulted in over 3,000 employees in the sector being recalled to work.

Meanwhile, the Ministry of Tourism and the ABTA have been hosting a number of training sessions geared toward bringing taxi drivers, hotel workers and others in tourism-related fields up to speed with Covid-19 safety protocols.

Additionally, James revealed that the Ministry of Tourism has appointed a compliance team, which is charged with carrying out unannounced exercises at the airport, restaurants, and hotels on island to ensure they are fully compliant with the guidelines set out by the Ministry of Health.

Recently, the compliance team visited the VCBIA and took a non-invasive, standoff approach to taxi drivers as they observed them going through their routines while greeting arriving passengers, seating them, and loading their luggage into the vehicles.

According to Appoy Robinson, the compliance team’s supervisor, the weak areas will be highlighted and drawn to the attention of the taxi drivers through their associations as well as the airport authority.

“The assessment provides an opportunity for gaps to be identified between the training and the actual execution of the protocols that are established. The trainers will then be able to adjust their delivery accordingly,” Robinson said.