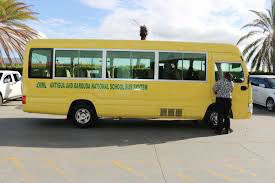 Talks on the possible extension of the school day from 8 am to 4 pm could be seen as a major positive once a clear programme is implemented to account for the extended hours.

That was the view of two educators who spoke on the matter on Sunday’s Big Issues programme.

Principal of the Ottos Comprehensive School Foster Roberts acknowledged that while he is not personally opposed to the lengthening of the school day, the matter should be thoroughly ventilated with the local union that represents the interest of teachers, and a clearly defined plan should be outlined.

“We are not the first territory in the region to have this discussion. It is nothing new, but the question is how we are going to be utilizing these extra hours with the students and the teachers on the various campuses that would be of importance to me,” Roberts said.

He also added that the decision should be guided by research.

A source within the Ministry of Education revealed weeks ago that officials had been having internal discussions about extending the school day, however no definite decision had been made.

The source also disclosed that the intention is to have the students engaged in extra-curricular activities that would be integrated into the education system, and talks would be held with the local teachers union, and the National Parent Teachers Association.

Meanwhile, another educator, Joshuanette Francis, is also questioning what will be done during the extra hours. She said planning is important as a lot of teachers are employed elsewhere on a part time basis and those with obligations to their families.

“A lot of thought and planning will have to go into it but I can see the need for us to reach children especially with the pandemic and especially 4th and 5th formers who are going through to be writing exams,” Francis said.

President of the National Youth Council Guishonne Powell also addressed the matter, noting that while most students are not in agreement with the ongoing talks, be believes there is some merit behind the ministry’s position.

“I believe that we should extend the time, especially for the older students; they need that time to make up for the time that was lost throughout the past school year. I might not have the statistics right now, but we know for a fact that the education sector is far behind and we need to pick up the pace.

“This is a serious matter that we need to focus on especially right now,” Powell said.

Currently, sessions for public secondary schools are held between 8 am and 1:30 pm. It is not the first time that officials have mulled the idea of extending the school day.

The former United Progressive Party (UPP) government was also exploring the possibility, and while wide consultations were held on the matter then, key players within the sector were unable to reach a consensus.