We will not make this into a statistical exercise of whether the concern we are about to delve into has been on the increase lately. It is certainly nothing new or unheard of, and it is possible that any seeming lull in its occurrence may have been nothing more than a lapse in reporting – not necessarily on our part, or on the part of the police from whom we get much of our information.

Shocking as it may sound, many people do not report crimes committed against them – even lift threatening ones. The reasons vary from a sense of futility or despair that anything meaningful can or will be done about it; fear of reprisal or retaliation from the perpetrators and associates – aka homies (fellow gang members or abetting relatives) – or just plain shame and embarrassment at ‘being so stupid or careless or soft to allow that to happen to me’.

It’s rather like the shame and embarrassment that prevents so many women and children – girls and boys! – from telling anyone or seeking any help when they are raped or sexually molested.

The violence, violation and crushing helplessness of being mugged can feel devastatingly similar!

It’s one thing to have your bag ripped off your shoulder or grabbed from the beach while you’re taking a dip in the sedating seawater, your purse snatched from your hand or your wallet picked from your back pocket by creeps who run for dear life – away from you – once they’ve made the raid. Often all they want is to get to a place safe enough for them to rummage through the contents of your bag for what they really want: money or something they can convert to money fairly quickly and easily – your jewelry, your watch, your phone and other electronics so universally common and abundant.

It’s quite a different ball game when the robbers are more than mere snatchers, but muggers – the ones who are prepared to fight and disable or even kill in order to rob. Many won’t wait for you to fight back before they resort to such violence. They come already equipped and determined to do so as a prerequisite to robbing their targets; for the simple and obvious reason that a disabled or dead victim can’t pursue them, can’t raise the alarm right away, will be delayed or denied reporting them to the police, will have difficulty or impossibility identifying them later.

Without prior warning or challenge, a person gets whacked on the head with a stone or a piece of lumber, or have a knife plunged into his torso, just so that an unfeeling criminal could have an easier time relieving him of something deemed valuable – more valuable than the victim’s wellbeing or life where the soulless attacker is concerned.

We must never give (or get) the impression that we are more concerned about tourists than our own people where crime is concerned, as it is clear that domestic victimhood bears the brunt of this fearful oppression inflicted on all of us by that anti-social (think, anti-society) minority. But neither must we scoff at the need to have a special heart for visitors – even without paying any homage to the arguments about their economic importance to our country.

For one, they are targeted precisely because of that assumed or expected pecuniary abundance. After all, you’re travelling and touring, spending and dining, cruising on a mega pleasure boat and lodging at hotels with all the creature comforts because you have money; sporting expensive cameras, appearing so self-indulgently wealthy behind your super-dark sunglasses – there’s got to be nuff ching-ching and bling for the taking

Second, observe that several of the visitors who have been targeted lately have tended to be elderly people, for which the reasons should be obvious: reduced ability to fight back or flee, hence more easily overpowered. We must also bear in mind that a visitor is relatively unfamiliar with the surroundings, easily disoriented, unsure of where to flee or seek help. Heck! You might run from your attacker – but straight into the oh-so-welcoming arms of his homies!

Visitors might be more likely or susceptible to these vulnerabilities, but on any day they could apply to any of us: targeted because it’s month end, so someone figures the likelihood is great of finding money on us (like the security guard at Powells, perhaps); we may appear a little advanced in years or not in the best physical shape to run or fight pack, so the predator(s) feel more emboldened to pounce; or it may not be difficult for the criminal mind to work out that we do not seem quite at home with our surroundings of the moment, and will therefore be at a loss or disadvantage in trying to pursue or flee from him.

The fight against what may be an upsurge in muggings requires a little practical wisdom from each of us as individuals, which we won’t go into here or now. But what it does demand is a universal, unanimous, no exceptions, no excuses response from all of us as a society against those bent – for whatever reason – on being anti-social . . . anti-society. We must give the police all the support, assistance and encouragement that we can lawfully muster in terms of making reports and providing them with whatever information, leads and tips we have – as did that courageous and upstanding Good Samaritan in Hatton last Friday. 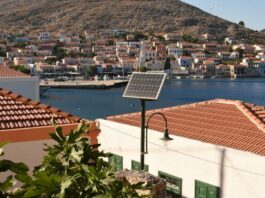 Caribbean can learn from the greening of Greek islands