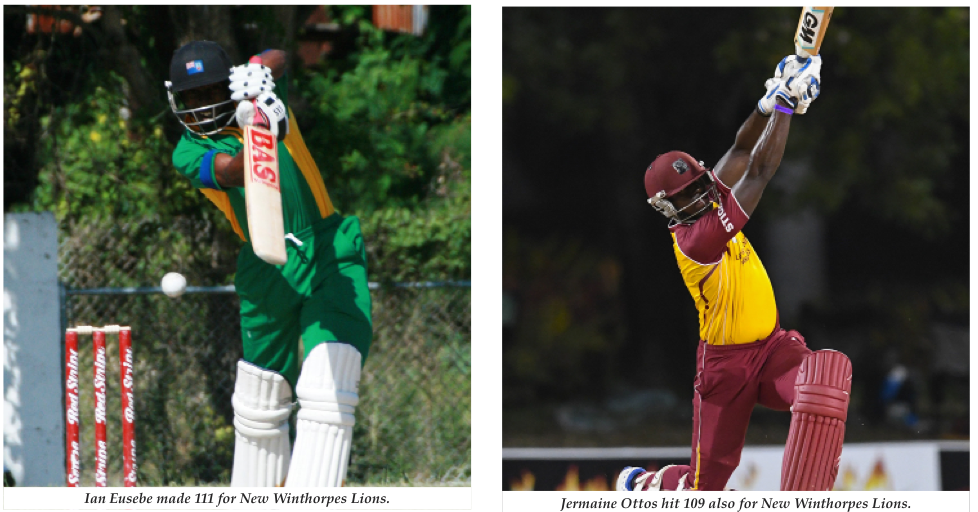 CUB Bethesda Golden Eagles racked up their fourth victory in as many matches in the State Insurance Super 40 Cricket Competition with a three-wicket victory over Anderson Carty Empire Nation on Sunday.

Asked to bowl after Empire won the toss, Bethesda restricted the home team to 179 for nine in their allotment of 40 overs. Cleton Payne cracked seven fours and one six on his way to a top score of 61 while Leeward Islands Hurricanes opener Kieran Powell made 31. Essan Warner was best with the ball for Bethesda, claiming three wickets for 24 runs in eight overs.

Eagles, in their chase, raced to their target at 181 for seven in just 31 overs. Captain Deran Benta top scored with 63 from 65 deliveries. He his six fours and three sixes. Warner contributed with 25 runs. Samuel Peters bagged three for 30 in seven overs bowling for Empire while Justin Athanaze snatched two for 17 in eight overs.

Meanwhile, in what was the biggest margin of victory over the weekend, New Winthorpes Lions beat Massy United Insurance Combined Schools by 332 runs.

Batting first at home, Lions had centuries from Ian Eusebe and Jermaine Otto who made 111 and 109 respectively. Eusebe had 15 fours and two sixes while Otto slammed 16 fours and one six in his knock. J. Francis and M. Greaves each bagged two wickets bowling for Schools.

When their turn at the crease arrived Combined Schools could only get to 45 all out. Ishmael Peters and Asher Murray-Cornelius did the damage with the ball, both picking up four wickets. Peters had four for 19 while Murray-Cornelius snagged four for six.

Batting first, Crushers failed to break the 100 barrier as they were all out for 97 off 31.1 overs. Kofi James grabbed three wickets for 27 runs while there were two wickets each for Avier Christian and J. Massiah respectively.

Blackhawks then raced to 100 for two in just 13.4 overs. Christian led the charge with 40 from 28 balls while Karima Gore and James added 22 and 21 to the successful chase.

All Saints Pythons beat Bolans Blasters by 74 runs. All Saints made 246 all out with Jewel Andrew hitting 83 and Kerry Mentore getting 67. Taiem Tonge picked up four wickets for 32 runs bowling for Bolans.

In the other match played on Sunday, Jennings defeated Rising Sun Spartans by 81 runs. Jennings posted 189 for eight in their 40 overs with Paul Miller hitting 32. Daihri Francis and Jahiem Africa added 28 and 22 runs respectively. Melvin Charles picked up three wickets for 31 runs bowling for Spartans.

The visitors, in reply, were all out for 106 with their best effort of 28 coming from Tassilo Allen. There were three wickets each for Jedidiah Martin and Winston Nelson bowling for Jennings.