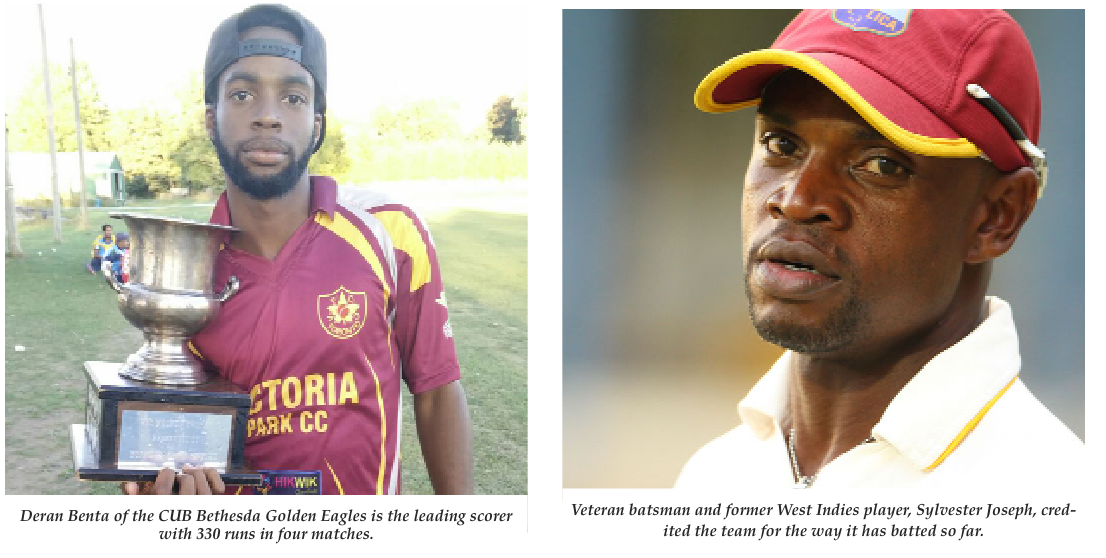 Captain of the Bethesda team, and leading scorer with 330 runs in four matches, Deran Benta, credited his team’s string of successes to proper preparation and application during matches.

“We come out and practice every day, practice hard against each other, and we just have this mentality where we want to become winners, so we play like winners. I am also very happy for my bowling unit which is led by senior player, Anthony Martin, and all the players came and did their jobs,” he said.

Four points adrift of Bethesda with 12 points after four showings, is the rapidly improving Jennings cricket team with three wins and one loss.

Coach and president of the club, Glen Miller, although pleased with the team’s performances to date, said there is still room for improvement.

“There are lots of areas where we can improve, and if you look at our scores, nobody [batsmen] are not getting any big scores, so we definitely have to improve on that. We need batters to bat through the innings, but we are not getting that as yet, but everybody is chipping in. We are getting some 30s, we’ve gotten a few half centuries, but as a cricket coach you’re always looking for improvements because if you misfield a ball then you think you can improve, if you bowl a wide you think you can improve, but we are working hard and this is one of the year where Jennings is actually training the hardest,” he said.

Jennings, in their only loss, went down by just two runs to Empire Nation but the Jennings men have enjoyed victories against Rising Sun Spartans, New Winthorpes Lions and Massy United Insurance Combined Schools.

Occupying the third position, also with 12 points, is New Winthorpes Lions with a record of three wins and a single loss. They picked up victories against Blackhawks, Combined Schools and Empire Nation.

Veteran batsman and former West Indies player, Sylvester Joseph, credited the team for the way it has batted so far.

“Our team is batting well and the batsmen continue to prove that when you’re doing well, and you’re in form and get an opportunity, then you have to take it, and I think they did that. We have Jermaine Otto and Ian Eusebe, and I think Eusebe has been our mainstay for the season so far, and he continues to excel in his batting,” he said.

Also on 12 points in the fourth position is All Saints Pythons with Spartans and Empire both on eight points in the number five and six positions respectively. Blackhawks, Crushers and Schools all have four points while Bolans Blasters are yet to get off the mark.