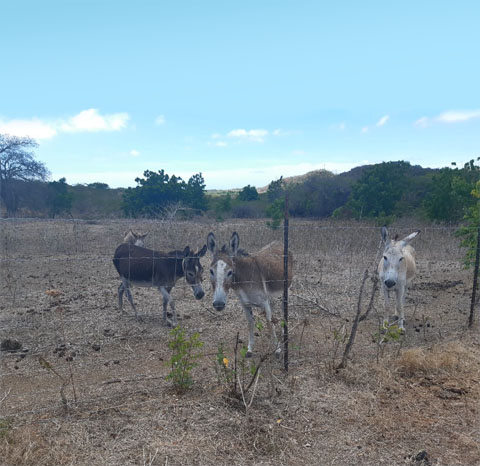 About 150 donkeys housed at the Donkey Sanctuary are growing weak from hunger and thirst as drought conditions persist across Antigua and Barbuda.

The 35-acre land near the farming community of Bethesda is barren, barring what seems like several acres of neem trees and a few dry blades of grass.

President of the Humane Society, Karen Corbin, told Observer that there has never been enough grazing on the property to feed the donkeys, and with tourists no longer visiting the sanctuary, Covid-19 has played its part in further crippling operations.

“We’ve always had to pay someone to cut and carry grass for them every day. The truck goes out, it gets filled with guinea grass and then they come and feed the donkeys. We had to lay that person off when the gate closed because we have no income” she explained.

As the drought continues, the nutritional value of the guinea grass is also waning and some donkeys have strangely resorted to grazing the bark of the neem trees.

“They’re great for shade, but they’re disastrous for allowing room for other items to grow that the donkeys could perhaps nibble, because they can’t eat the neem trees or the leaves there. Although, as the drought continues, we find them trying to scrape the bark of the neem trees because they’re hungry.”

Some guinea grass is still available, but the dry conditions have left it brown instead of green. It fills the belly of the animals, but alone it isn’t enough to give them the nutrition that they need.

Corbin said older donkeys are more at risk of dying from these conditions, recalling a drought three years ago that killed some of the donkeys at the sanctuary.

“I’m just realising it’s similar to Covid – the very young and the old are the ones that will be the first to get into serious difficulties,” she remarked.

Without the sanctuary, donkeys are allowed to breed and roam freely on the island which prompts the questions, why not set them free.

Corbin however explained that they could not simply release the donkeys to wander outside the sanctuary’s boundaries because it is surrounded by farmlands, where farmers are working tirelessly to avoid possible food shortage during the pandemic.

“They’re a number of naysayers out there who will say let the donkeys out [because] the ones you see wandering around look fine… “they look better because they’re able to wander the whole island finding something to eat, but they also go to the farmers’ fields and eat down the crops, and knock over trash bins. It would be totally irresponsible of us to put 150 donkeys back out into the community, particularly right now when farmers are struggling to grow their crops.”

Faced with these tough circumstances, the society is at the mercy of individual donors and donor agencies like the UK Donkey Sanctuary and the Southeast Hay Distributors in Florida.

A thankful Corbin said “The hay and straw containers have come just in time. The donkeys are very thin.”

“I hope by the end of June we’ll have enough to start ordering the container and have it come in at the end of July. If we can do that, I believe the donkeys will be okay. If we can’t, I have no idea what we’ll do because it’s my understanding that the drought’s going to continue for quite some time.”