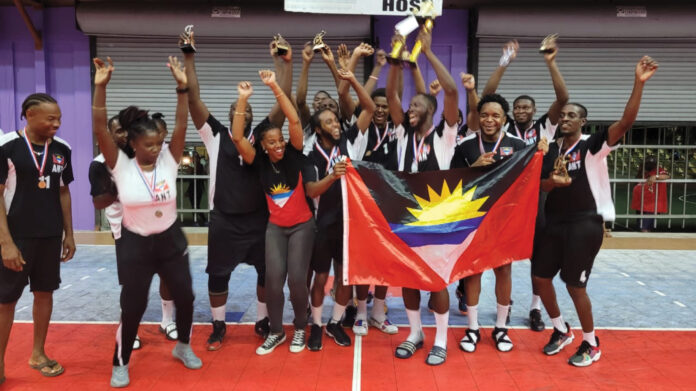 The YMCA Sports Complex erupted into a frenzy on Sunday night as the Antigua and Barbuda senior men’s team were crowned champions for the first time in the Eastern Caribbean Volleyball Association (ECVA) Championships.

An emotional captain of the history-making team, Adrian Constant, told this newsroom just a few minutes after the match that it was a surreal feeling to win the way they did on home soil.

Constant led his team to victory with 20 hits.

“It feels good mainly because I’ve lost in two finals and it was to Windward Island teams, and I remember when they beat us here in 2016. Coming into the tournament, we had ex-players doubting us, we had fans doubting us, we really only had our 13, our coaches and our parents behind of us, and it just feels good beating a team of that caliber. They have professional players, they have players that are still in college; it just means a lot,” Constant said.

He credited Jamarie ‘Tusty’ James and his other teammates for a job well done.

James tied with another teammate, Cairon Davis, who had 15 points.

“He can easily be the best player not just in the ECVA, but the Caribbean, but what happened was he kind of struggled towards the start of the tournament, mainly because of his work schedule. He only practiced about five times with the team.

“Tonight, I really struggled at the start of the game and he kept me floating, like last night I kept him floating, and by the time we both got back in the game, it was over. This is our first one. This is the first time that we are winning this championship,” Constant explained.

St Lucia’s Sheldon Descartes was the other awardee in that category.

Head Coach of the winning team Fitzroy Benjamin was also elated after the win.

He mentioned that a number of players like Cairon Davis stepped up and made a huge impact on their path to securing the country’s first ever title in the regional competition.

St Maarten were also victorious that evening as they defeated Grenada to grab the third-place finish in the tournament.

Several other individual awards were handed out on Sunday evening.

Bolan was also named the Best Spiker while his teammate Yahn Florent was the Best Server.

Jahmal Small of St Vincent and the Grenadines was the Best Setter, while Grenada’s Shevon Gludd was Best Libero. He was also the Best Digger.