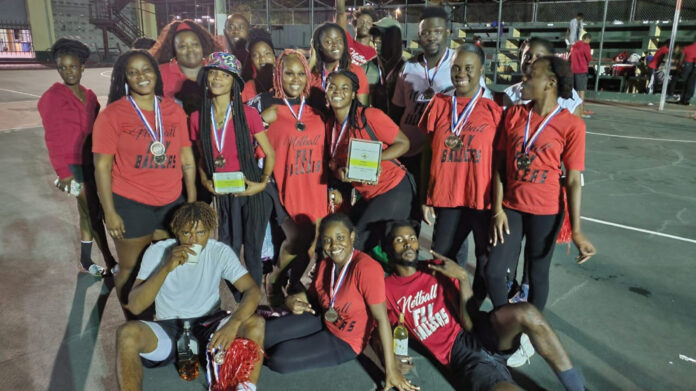 The curtains came down on the 2022 edition of the Kess Imports ABNA Village league on Thursday at the YMCA Sports Complex.

It was championship night in the mixed division as the top three positions were decided.

Ovals Flyballers Red Rockets finished their campaign undefeated, and as champions in the mixed division, after edging out Drahz Eastsiders 25-19.

For Ovals, Akiel Hazelwood who was later named the Most Valuable Player (MVP), led his team to victory banking 21 of his 25 attempts. Teammate, Daniel Perez made four.

Hazelwood was also given the award as the overall shooter with the most goals for the season, accumulating 1.

His teammate, Marcus Cornelius was adjudged the Most Outstanding Player.

Eastsiders’ Kareem ‘Macky’ Edwards made 14 in a losing effort.

Third place, in the mixed would also go to the Ovals Flyballers club as the White Doves defeated Grays Green Tigers 19-15.

Awards were also given out in the other divisions as well, as Curtain Bluff Old Road and Drahz Eastsiders were named joint champions in the Female A Division while John Hughes Female Flyers and Grays Green tied for third place.

Old Road’s Amey Lake was the MVP for that division.

United 2’s Kika Josiah was the MVP while Old Road’s Tasia Luke was named the Most Outstanding Player.

Awards were also given to the most improved teams in each category.