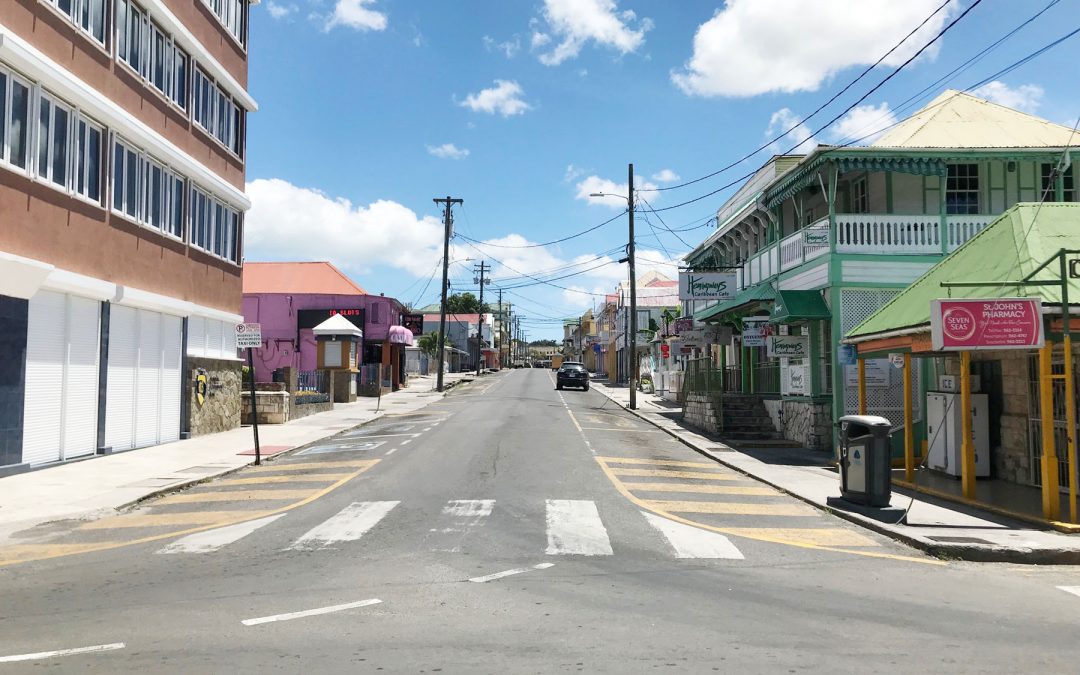 The coronavirus pandemic and associated closures have created a tumultuous year for economies worldwide. Photos taken by Observer media on first day of national lockdown on April 2

Covid-19 has had a marked effect on the cost of living in Antigua and Barbuda, driving prices down on almost everything from food and alcohol to clothes and shoes.

Inflation tumbled in practically every expenditure category – except health-related products – documented by the Consumer Prices Index (CPI) between January and July this year.

Clothing and footwear showed the biggest drop in prices, with inflation plummeting from 9.3 percent at the start of the year to a staggering minus seven percent in July.

Inflation refers to the rise in prices of common goods and services.

The data was released to Observer to mark World Statistics Day yesterday and provides a glimpse into how the local economy has fared amid the coronavirus pandemic.

Jerry Aska, a CPI research officer, said the decreased price of clothes and shoes was likely due to “stores trying to drum up sales”.

“They would probably have held an extended sale period to encourage people to buy,” he told Observer.

And while there would naturally be some fluctuation in prices throughout the year, the variation seen in 2020 is significant, in line with a tumultuous year for economies worldwide.

“There would be some seasonal changes, for example just before Carnival, clothing prices typically come down,” Aska explained.

The inflation rate for food on a whole dipped from 2.7 percent in January to 0.5 percent in July. However, if one looks at the picture over a 12-month period, a drastic fluctuation is apparent.

In March 2019, the rate was 0.3 percent, compared to 3.9 percent in March this year when the coronavirus was first confirmed in Antigua and Barbuda. Food prices then nosedived to a 0.1 percent inflation rate by June.

Meat and related products saw an overall 5.3 percent hike between March 2019 and March 2020, while for vegetables the rate skyrocketed to 14.6 percent.

“The change in rates can be a combination of things – such as source vendor and shipping rates,” Aska continued. “A drop in food prices might be because stores are substituting products with cheaper brands.”

The recreation and culture category already had a low inflation rate of minus 5.8 percent in January. Six months later that had dipped further to minus 9.8 percent. The category includes items such as TV sets and might be attributed to sales put on by local furniture and department stores.

This week, the Statistics Division also revealed data for the country’s main economic driver – tourism. Antigua and Barbuda enjoyed the healthiest season in recent years in early 2019. For the first three months of last year, visitors spent around US$230 million. That dipped to around US$210 million for the first quarter of 2020.

The country’s borders were officially closed to tourists in the last week of March. Unsurprisingly, visitor expenditure plummeted to less than US$20 million for the second quarter of 2020.

Borders reopened to international visitors on June 1. Total visitor arrivals for the first six months of this year amounted to 356,000, compared to more than 600,000 for the same periods in both 2018 and 2019.

Aska said he is optimistic that the economy will “stabilise” in due course.

“Given the indications from overseas markets, it might take another two years as more persons become employed and are able to spend more.

“In the meantime, there will be various adjustments made, for example, many businesses will look at selling cheaper products. When I look at comparisons regionally and internationally, such as North America, there are similar trends in the consumer price index, just with different contributory factors,” he added.

World Statistics Day is celebrated every five years on October 20 to highlight the valuable role accurate facts and figures play in everything from science to social policy.

Covid-19 has undoubtedly further emphasised the importance of comprehensive data. The numbers of cases, deaths and infection rates are reported by governments and media outlets worldwide each day – and used to make decisions on how to fight it.