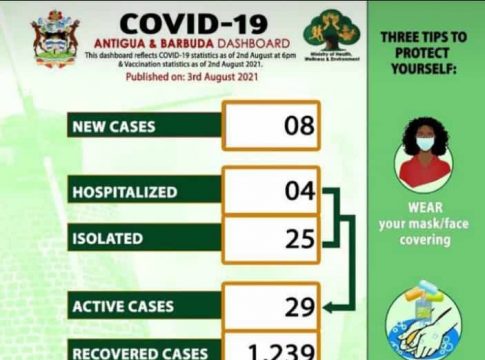 The most recent report received by the Ministry of Health, Wellness and the Environment from the Sir Lester Bird Mount St. John Medical Centre has revealed eight (8) new laboratory confirmed COVID-19 cases in Antigua and Barbuda as of Monday 2nd August 2021 at 6pm.

Seven (7) of the new cases are non-imported and one (1) imported.

Consequently, the total number of persons with laboratory confirmed COVID-19 cases in Antigua and Barbuda is one thousand three hundred and eleven (1311); which is inclusive of twenty-nine (29) active cases.  There are four (4)  hospitalized cases; three are (3) mild and one (1) moderate.

Meanwhile, thirty eight thousand three hundred and sixty-two (38,362) first doses of the Covid-19 vaccines have been administered of which thirty thousand nine hundred and twenty-eight (30,928) received the second dose.