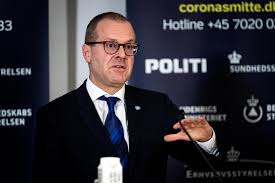 (DailyMail.co.uk) – The WHO’s Europe director has warned that countries need to prepare for a ‘second or third wave’ of coronavirus until a vaccine is developed.

Dr Hans Kluge said Europe remained ‘very much in the grip’ of the pandemic despite a ‘plateau or reduction in new cases’ since most countries went into lockdown.

Kluge warned that ‘Covid-19 is not going away any time soon’ and said public health would need to ‘have a more prominent place in society’ even when it does.

Scientists around the world are racing to develop a vaccine which would turn the tide against the virus, but it is likely to be many months away at least.

Speaking at a WHO Europe briefing, Dr Kluge said it was vital for countries to prepare for future outbreaks once the first peak had been reached.

He said: ‘If the first wave is gone, [the key issue is] that we have bought the time to prepare for a second or third wave, particularly if there is no vaccine.

‘The key issue is to be prepared, whether it is for a second wave or another outbreak of another future infectious agent.

‘This will require the collaboration and understanding of everyone, not least with the summer coming, that everyone has to do its share while moving to a new reality where public health has to have a more prominent place in society.’

Parts of Europe are starting to move towards a post-lockdown life, with schools already open in some countries and shops in others.

However, Britain remains under strict lockdown with no expiry date in sight as the death toll continues to mount.

Dr Kluge said there were positive signs Europe was passing the peak of the virus but remained ‘very much in the grip’ of the pandemic.

He said: ‘We’re now seeing evidence of a plateau or reduction in new cases. We must monitor this development very closely.’

In Britain, pharmaceutical giant AstraZeneca is making plans with Oxford University to distribute a vaccine if trials prove successful.

The university’s Jenner Institute began human trials last week, with some results expected by the middle of June.

John Bell, a professor of medicine at Oxford, said ‘we also want to make sure that the rest of the world will be ready to make this vaccine at scale’.

Dozens of vaccines are currently in development, but the WHO cautions that it will probably take 12 to 18 months to find one that works.

Dr Kluge said public health policy would have to remain at the top of the agenda even after the crisis comes to a standstill.

‘One of the things we saw very clearly in different countries is the speed with which even the best health systems can be overwhelmed and devastated,’ he said.

‘So the biggest lesson overall at this stage would be that health really deserves to be at the top of the political agenda.

‘Once we get out of the pandemic, through united efforts, this is a lesson never to be forgotten.’

Eurozone economy suffers its worst drop on record as it shrinks by 3.8% in the first quarter

The Eurozone economy suffered its worst drop on record in the first quarter of 2020 as business came to a standstill because of the coronavirus pandemic.

GDP in the 19-member eurozone fell by 3.8 per cent in the first three months of this year, even though lockdowns only began in March.

The plunge is the worst since records began in 1995 – worse than during the financial crisis of 2008-09.

The drop compares to a 4.8 per cent contraction in the US during the first quarter as the shock from the outbreak hits economies around the world.

The EU as a whole suffered a 3.5 per cent drop, which is also the largest on record, according to the bloc’s statistical office Eurostat.

The new coronavirus was mostly unheard of at the start of the January-March quarter (Q1), and was only declared a pandemic on March 11.

Italy was the earliest eurozone country to declare a national lockdown on March 9, with others including Germany and France following later in March.

‘This points to an much bigger fall in activity in Q2, when the full lockdowns will be in effect for almost half the time and will then be only partially lifted,’ said Andrew Kenningham of Capital Economics.

The slumps were especially large in France (5.8 per cent) and Spain (5.2 per cent) where the lockdown has been particularly strict, economists say.

‘France and Spain have been among the most strict in terms of lockdowns and hence their economies have suffered more,’ said Bert Colijn, an economist at ING.

‘This would suggest that a country like Germany has experienced a smaller-than-average contraction,’ he said. Germany has not yet released its own figures.

The French slump was the worst since the country’s statistics agency began keeping the figures in 1949.

France’s drop was particularly pronounced in services that involve face to face interaction, such as hotels, restaurants and retail stores.

Some countries have begun to edge out of lockdown by opening some shops, but most people in Europe are still being urged not to leave home unless necessary.

The tourism and hospitality industry has also collapsed, with hotels and restaurants shut down to stop the spread of the disease.

Economists expect unemployment to rise in the coming months despite an EU scheme to help subsidise wages.

‘This is why we need a recovery plan that is sufficiently large, targeted at the hardest-hit economies and sectors, and deployable in the coming months,’ he said.

Consumer prices grew by 0.3 per cent from March to April, but that included a 9.6 per cent drop in energy prices.

US oil prices fell into negative territory earlier this month, meaning producers were paying customers to take unwanted petroleum off their hands.