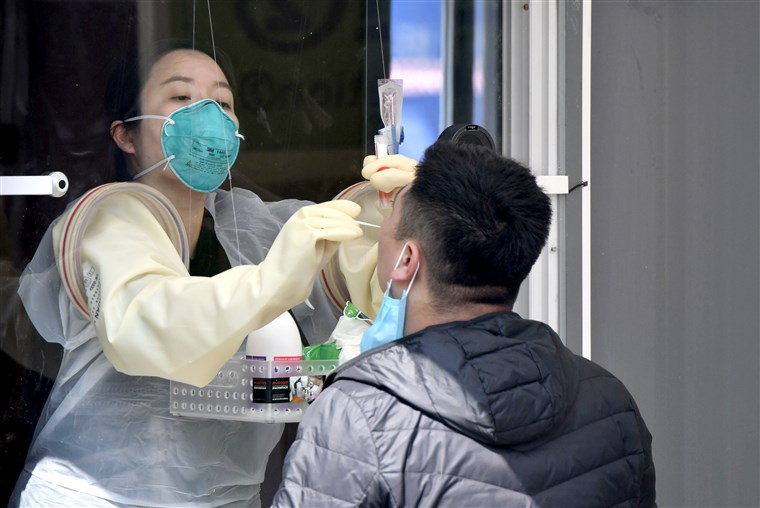 (nbcnews.com) – At least 14 sailors aboard the USS Theodore Roosevelt who had recovered from COVID-19 have tested positive for a second time, raising questions about immunity and whether people can catch the coronavirus shortly after getting better.

The sailors who “previously tested COVID positive and met rigorous recovery criteria have retested positive,” a U.S. Pacific Fleet spokesperson said in a statement. The sailors are now off the ship and are required to isolate for at least 14 days.

Experts said the perplexing test results don’t necessarily establish that a person can become infected twice — the positive results following negative tests may be a quirk related to the type of test that was used.

Nearly all of the diagnostic tests for COVID-19 in the U.S. look for snippets of the virus’ RNA, or genetic code. (Another type of diagnostic test, called an antigen test, looks for proteins from the virus.)

But according to guidance from the Centers for Disease Control and Prevention, “detection of viral RNA does not necessarily mean that infectious virus is present.” In other words, the test may be picking up a piece of the viral RNA that’s been left behind, rather than a fully intact, infectious virus particle.

A second positive test after a negative result may mean the virus is simply taking its time leaving the body, doctors said, and is no longer able to infect others.

“It’s possible that people could shed remnants of the virus for some period of time. That doesn’t mean anything is wrong with them or that they are contagious,” said Dr. William Schaffner, an infectious disease expert at Vanderbilt University Medical Center in Nashville.

A study from South Korea bolsters that idea. Researchers at the Korean Centers for Disease Control and Prevention analyzed data on 285 COVID-19 patients who also tested positive after having appeared to recover.

Scientists were unable to find evidence that the patients remained infectious. And viral samples taken from the patients couldn’t be prompted to grow and thrive in lab studies, suggesting that the samples were duds.

“What we’re finding more and more is that the fragments of virus that are being picked up on these swabs weeks later are not able to replicate,” said Dr. Ania Wajnberg, associate director of medicine at the Icahn School of Medicine at Mount Sinai in New York City. “They’re not live virus.”

Still, the world has known about COVID-19 only for mere months, giving scientists no indication yet of how the virus acts long term.

Sanders said the different diagnostic results might also be explained by false negatives. “I think that there is a lot to be learned about the testing and about the protective impact of having been infected or having developed an antibody,” he said.

Sanders and a team of researchers at Wake Forest have embarked on an ambitious study to get a feel for how the virus acts in people, how long symptoms last and how COVID-19 might lead to immunity from secondary infections, at least for a certain period of time.

The group has enrolled 15,000 volunteers, some of whom have had COVID-19 and others who haven’t. Each day, the volunteers are asked to record any possible symptoms they’re experiencing. If a person reports any kind of symptom, such as fever or a cough, researchers ask for more information.

“We will send them a home test collection kit to send back to us. We’ll test them to see if they have the virus and then continue to track them for antibodies after that,” Sanders said.

The research team will upload the results into a database, tracking symptoms in real time. Ideally, public health officials could then compare the information with electronic health records. Sanders said the project aims to tease out whether an uptick in cough, for example, correlates with a true rise in COVID-19 or simply with allergy season.

The research group plans to conduct antibody testing on 10,000 of the volunteers six times over the next year. So far, all of the volunteers are from health systems in North Carolina, but researchers are working to expand the study along the East Coast.

“This also allows us to collect the information necessary to start answering those more detailed questions.”