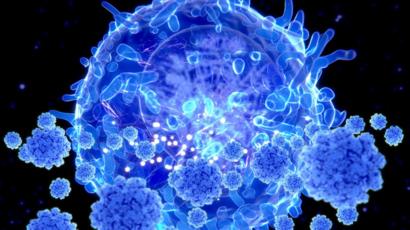 (BBC) – People testing negative for coronavirus antibodies may still have some immunity, a study has suggested.

For every person testing positive for antibodies, two were found to have specific T-cells which identify and destroy infected cells.

This was seen even in people who had mild or symptomless cases of Covid-19.

But it’s not yet clear whether this just protects that individual, or if it might also stop them from passing on the infection to others.

Researchers at the Karolinksa Institute in Sweden tested 200 people for both antibodies and T-cells.

Some were blood donors while others were tracked down from the group of people first infected in Sweden, mainly returning from earlier affected areas like northern Italy.

This could mean a wider group have some level of immunity to Covid-19 than antibody testing figures, like those published as part of the UK Office for National Statistics Infection Survey, suggest.

It’s likely those people did mount an antibody response, but either it had faded or was not detectable by the current tests.

And these people should be protected if they are exposed to the virus for a second time.

Prof Danny Altmann at Imperial College London described the study as “robust, impressive and thorough” and said it added to a growing body of evidence that “antibody testing alone underestimates immunity”.

This doesn’t necessarily get us any closer to herd immunity, though, according to assistant professor Marcus Buggert, one of the study’s authors.

More analysis needs to be done to understand whether these T-cells provide “sterilising immunity”, meaning they completely block the virus, or whether they might protect an individual from getting sick but not stop them from carrying the virus and transmitting it.

Much of the discussion around Covid-19 immunity has focused on antibodies – Y-shaped proteins which act like “missiles shooting down a target”, assistant Prof Buggert explained.

They bind to the virus before it can enter your cells, and neutralise it.

If antibodies fail to neutralise the virus, it can enter your cells and turn them into virus-making factories.

T-cells, on the other hand, target already-infected cells and completely destroy them, stopping them from spreading to other, healthy cells.

Like antibodies, T-cells are part of the bit of your immune system that has a memory. Once it recognises a particular virus, it can quickly target cells infected with it and kill them.

A drug called interleukin 7, known to boost T-cell production, is being trialled in the UK to see if it can aid patients’ recovery.

Researchers from the Francis Crick Institute, King’s College London and Guys and St Thomas’ Hospital noticed a group of 60 severely ill patients appeared to experience a crash in their numbers of T-cells.

This was not observed in the Karolinska study, which found the sicker the patient, the higher the level of antibodies and T-cells they appeared to produce.

While theirs is the biggest T-cell study done so far, it still involved a relatively small group of patients.

T-cells are very complex and much harder to identify than antibodies, requiring specialist labs and small batches of samples being tested by hand over the course of days.

This means mass testing for T-cells is not a very likely prospect at the moment.