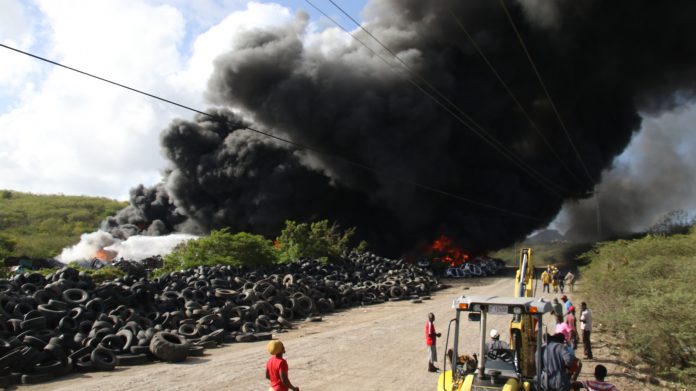 Residents in the areas surrounding the Cooks Landfill will be able to breathe a sigh of relief as firefighters have been able to contain the fire there.

“We were able to cut the fire off, cut it to a small section and it burnt out. So, we pretty much have it under control to the comfort of the fire department; they left us to control the remainder. We are now engaging in proper land filling practices. So, we are covering the burning mass. Essentially, what we have here are tires and derelict cars and you know tires are petroleum based so we were able to cut off the burning section from the rest of it, the flames have subsided and what we are getting now is the residual smoke from the burning of the petroleum-based products,” Spencer explained.

The early Friday morning fire at the Cooks Sanitary Landfill caused damage to the access road resulting in a brief delay to operations at the landfill.

The blaze started shortly after 7:00 am and no one was injured.

Operations at the landfill will pause for a brief period as a result of the blaze, however work will not come to a complete halt.

The blaze will impact the resumption of a program to remove derelict vehicles from across the country.

Spencer says some residual smoke will still be seen but nothing compared to earlier today.

He was also pleased with the work that his staff along with the fire department have done.

“Things are a lot more under control. I am actually very pleased with the work that the guys have done. There will be some residual smoke over the next few days because of the nature of the products that were burning, but it will not be anything when compared to this morning.

“We will continue to cover the weight, and cover as much as possible. We will do as much as we can into this afternoon and even tomorrow if we have to ensure we cover that burnt patch of tires,” Spencer added.

The cause is still unknown, but Spencer revealed that law enforcement is investigating the matter.