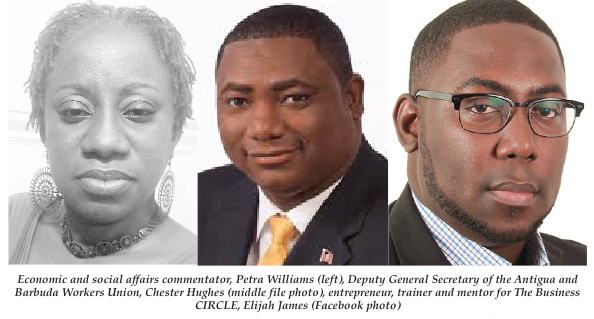 With the global economy continuing to reel from the impact of the Covid-19 crisis, and pundits are warning that while unemployment may continue to rise, increased underemployment is also a cause for concern.

Economic and social affairs commentator, Petra Williams, explained that an economy with a bleak outlook “unless we really begin to move way outside of some boxes and get very creative, and that will be very difficult in the short to medium term for us because of the structural rigidities in our economy, unemployment, and I want to add underemployment, are going to be significant features for us.”

During an interview on Observer’s Big Issues programme, Williams added that with the volatility of some jobs due to the pandemic and decreased levels of consumption, “we have to watch carefully the levels of underemployment in terms of persons really working, but still unable to meet their basic needs.”

According to the International Labour Organisation (ILO), underemployment occurs because of reductions and reorganisations in the demand for labour, during which many workers face not only a total lack of work opportunities, but also a lack of adequate work opportunities.

The body said this gives rise to situations in which persons in employment are often obliged to use their skills only partially, to earn hourly incomes which are lower or to work less hours than those they are willing and able to work.

Speaking during the same programme, Deputy General Secretary of the Antigua and Barbuda Workers Union, Chester Hughes, cautioned that as time passes, many people who have been unemployed would become “desperate” for work and “would fall for absolutely anything.”

He added, “It is here that the unions and the Labour Department will have to police to maintain the standards and to ensure the laws are not broken by employers in order to facilitate making a profit.”

Hughes said that there must be a balance between the rights of workers and the survival of businesses.

Meanwhile, entrepreneur, trainer and mentor for The Business CIRCLE – Elijah James, who was contributing to the same discussion, said that when there is a choice between feeding one’s self or family and being jobless, many individuals are more likely  to take jobs that they traditionally would have not considered.

He is advising residents to use the downtime to “retool themselves” and increase their skillsets in order to take advantage of future opportunities. “There are a lot of free sources and opportunities that are going to be online for persons to learn about entrepreneurship or even getting retrained in another field and I would encourage people to take the opportunity to do so,” James said.