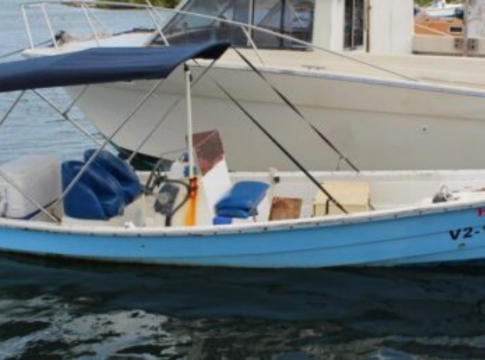 Officials at the Antigua and Barbuda Defense Force Coast Guard (ABDF CG) have admitted that the department could have done better in communicating information to the families of the missing fishermen who are still lost at sea.

Head of the ABDF CG, Lieutenant Elroy Skerrit, told Observer in an exclusive interview that there were challenges by the numerous conflicting information with respect to the missing vessel.

However, he said, this did not stop the coast guard from working assiduously with the Maritime Rescue Coordinating Center (MRCC) Fort De France, the Regional Security System (RSS), the United States Coast Guard (US CG) San Juan, and local entities to resolve the problem. “We admit that we could have done more to keep the family abreast of our efforts.” Skerrit said.

Following the department’s decision to suspend the search for fishermen, Leon Sears and Lester Small, a meeting was held last Saturday to discuss and ventilate several concerns with the families of the men.

The details of the meeting, which are not being disclosed at the request of Lester Small’s family,  seemed to have satisfied the families who were extremely disappointed and heartbroken after the decision to suspend the search was announced late last week.

ABDF coast guard officials said, “Going forward, we will have more organized and formal ways of communicating information to all persons concerned.”

When asked about the mayday call from the men on board the Eden to the ABDF coast guard, Skerrit said “We never received a mayday call; that is furthest from the truth.”

“We have individuals who are trained in managing and executing search and rescue missions.”

He continued, “although the coast guard is challenged in terms of capacity, we are able mobilize other resources whether it be local or regional to handle emergency situations as warranted.”

As of now, the ABDF CG is still pursing leads, and will continue searching for the men once information is forthcoming.

The ABDF CG has asked that mariners be on the lookout for any signs of the vessel, Eden, or any items that may look out of the normal floating in the country’s waters.

Antigua and Barbuda to witness Barbados’ change to a Republic

We hope and pray