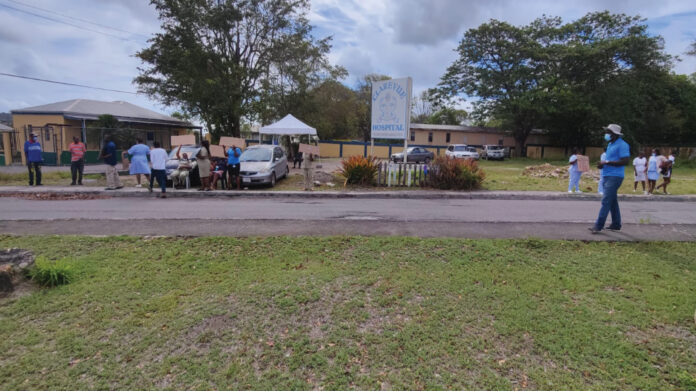 Staff at a government-run facility have made it clear that industrial action will continue until their concerns are addressed.

The most recent picket by Clarevue Psychiatric Hospital employees took place yesterday in the street outside the institution. Workers held placards and unified their voices to demand outstanding payments, among other issues.

According to Shop Steward Ava Bowen, the main topic of concern is owed overtime pay. She also indicated staff’s need for their promised Covid stipend, given how hard they have worked to ensure patients’ health and safety during the pandemic.

“We haven’t been paid overtime from since 2016; we have persons who have not received any overtime money. At the moment, it’s been five years and we haven’t gotten any answers.

“Every day questions are asked and nothing. We are dedicated workers.

“We are in a lot of trouble every day with our patients. We are taking care of them through the pandemic,” Bowen told Observer yesterday.

In addition to the outstanding monies, Bowen raised employees’ concerns about a lack of adequate security at the facility. She highlighted that the poor lighting makes it challenging for security staff to patrol at night which could give room for ill-intentioned individuals to roam free.

“You could imagine they have an old building behind there; we don’t know for how long two persons just take residence there.

“Finally, we caught one of them last week, and to get him we had to call a team to try and manage him and he had about an eight-inch scissors.

“Prior to that, he went to stab up a male officer and a stores man because he keeps bringing drugs, liquor and cigarettes to the patients because we have no control,” she claimed.

Another major concern is the absence of a generator which Bowen believes poses a serious threat to the proper storage of medication in the event of power outages.

“[Monday] was awful for us. The power went off and we don’t have a generator here for the past six years. Even to that we keep asking because we have medication in the fridge and when [power] goes, you know what,” Bowen added.

The staff have been agitating for clean water, additional washing machines and secure fencing as well.

Before yesterday’s action, Clarevue workers joined pickets in February in hopes that their issues would be addressed by the government.

Ena Dalso-Henry, Permanent Secretary in the Ministry of Health, told Observer she had made recommendations to Cabinet over settling outstanding pay.

“There’s a significant amount owed,” she said. “Cabinet did take on my recommendations.”

She said disbursements would begin shortly, in line with those being given to other agencies under her auspices, including the Fiennes Institute and the Central Board of Health.

Dalso-Henry added that measures were also underway to address security issues at the hospital, including repairs to the perimeter fence which she said was “constantly being broken down”.