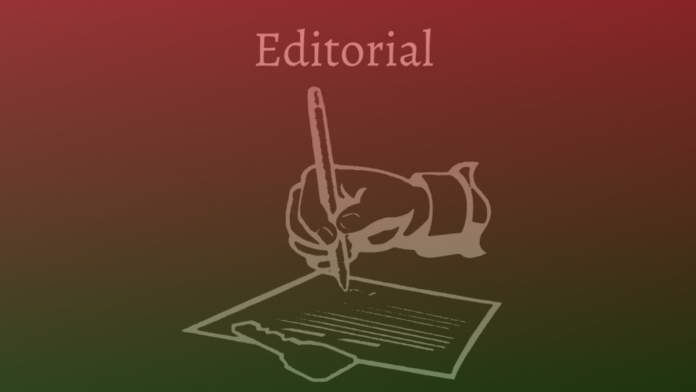 The songwriter titles his hymn, COME, THOU LONG EXPECTED, in reference to the long-foretold arrival of the Messiah. In like manner, albeit with infinitely less gravitas, we here in Antigua and Barbuda are breathing a sigh of relief and welcoming the news that the long-awaited election is just about a month away – January18, 2023. As the scriptures would say, “Even so, come quickly.”

His nervousness, especially evident in his rambling, aimless, uninspiring presentation at the Antigua Barbuda Labour Party (ABLP) candidates’ launch this past Monday evening, reminds us of Shakespeare’s Macbeth, after he commits a dastardly deed that fails to afford him the security of the kingdom and the peace of mind, that he so desperately craves. Says he to his equally tormented wife, Lady Macbeth, “Ere we shall eat our meal in fear, and sleep in the affliction of these terrible dreams that shake us nightly / Better be with the dead, whom we to gain our peace, have sent to peace, than on the torture of the mind to lie in restless ecstasy. . . .” [MACBETH 3.2, Shakespeare] Of course, the ‘torture of the mind’ that afflicts Macbeth is the selfsame torture that afflicts He of a High Place – that fear of the future, and the very real possibility that he could no longer be king. In our local potentate’s case, the fear is that he may no longer be He of a High Place.

Ironically, never mind the treacherous prophesy of the three witches, who slyly tell him that “no man born of woman can defeat him,” we find that Macbeth becomes obsessed with his rivals, real or imagined. He begins to act irrationally. He is not a victim of fate, but rather a victim of his own free will. He is in control of all his actions, never mind that he makes a series of twisted decisions that ultimately seal his doom. He is a victim of his own self. Hmmmm! Similarly, He of a High Place is a victim of his own delusional thinking. He has alienated his colleagues, and local wags suggest that they can barely tolerate his boorish and self-centered behaviour. They go along with his coarseness by holding their noses, because it suits their love of power. If they could rid themselves of him, and still hold on to their exalted positions, they would. Their stilted dancing, and obviously forced smiles at the aforementioned ABLP candidates’ launch spoke volumes. The whole charade on the stage was painful to watch.

Equally painful, and downright embarrassing, was the point where He of a High Place, was greeted with several stretches of an awkward silence during his meandering diatribe, and after a few shouts by supporters for ‘Water,’ he brought his lame spiel to an end with words to the effect that he will conclude his speech because he knows that the people are not there to hear him, but rather to see and hear the many entertainers who were scheduled to appear. (Don’t laugh) Quite pathetic! It is a metaphor for the national disenchantment with him.

There is national disillusionment with the dreadful, powder keg situation at His Majesty’s Prison. The situation at Clarevue is also quite disturbing. The lack of water is still a nightmare, as is the warri board situation on our roads. There is bush everywhere, and our sidewalks are crappy and dangerous. And don’t talk about the vexing failure to see a project through to completion. The Tomlinson’s Cemetery is still a figment of somebody’s imagination, as will be the supposed new aquatic center on which ground was hastily broken a week ago.  That is a cheap and transparent election stunt. No one is impressed. The Anchorage Road bridge is unfinished, as is the Crabbe Hill Road repair work. The Sunshine Hub Car Park still languishes, as does the Nugent Avenue state-of-the-art hospital. Seems, the late Sir Lester Bird was on to something when, dismayed by the litany of incomplete projects, he beseeched He of a High Place to finish one project completely, before venturing on to the next. Needless to say, the good Sir Lester’s entreaties fell on deaf ears. (See the unfinished project to install street lights on Friars Hill Road and the Sir George Walter Highway). Sigh!

The United Progressive Party (UPP) on the other hand, a party with a sterling record of accomplishment during its ten years in office, has made a number of visionary proposals for a betterment here in Antigua and Barbuda. From the critically acclaimed Maintenance of Minors (MOM) proposal, to the pledge to making the former LIAT workers whole, it is manifest that this is still the Party that cares for the people. The Party has pledged to fix the water situation that has bedeviled this Administration and its too-little-too-late effort. (See the hurried pre-election groundfaking at the Fort James reverse osmosis plant).  The Social Security mess will be addressed, as will the down-the-rabbit-hole NAMCO. The Party promises to increase youth representation in government, and stage small business pull-ups in November of each year. If you recall, the small business pull-ups were wildly successful, pumping some $250,000.00 in the various communities, and generating much rapport and goodwill. It is a brilliant idea. As is the plan to reduce Customs duties on a number of basic food items like ling fish, corned beef, oats, cream of wheat and, the ever- popular pig mouth.

Ladies and gentlemen, we present for your careful consideration, the two major political Parties – the mediocre and unimaginative ABLP, the spent force; and the young and vibrant UPP – the Party of new ideas and initiatives. We invite you to ‘chose ye this day whom ye will elect.’
There are many more plans in the pipeline.