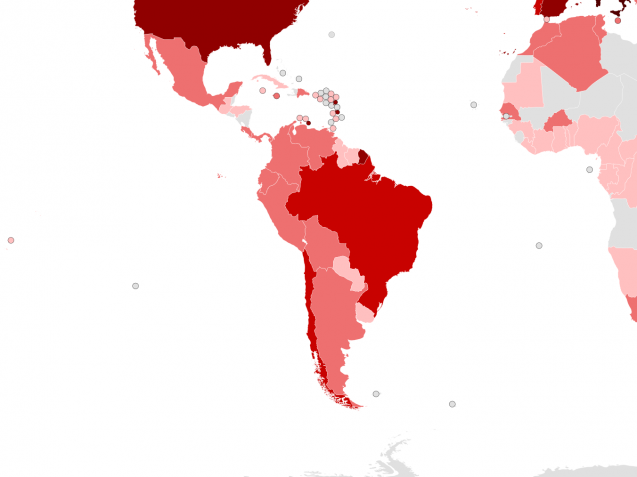 (UN News) – Greater solidarity must be shown to Central and South American countries which have become “the intense zones” for COVID-19 transmission, a top official with the World Health Organization (WHO) said on Monday.

Dr. Michael Ryan, WHO Executive Director, was speaking to journalists listening in to the UN agency’s regular virtual update on the pandemic.

He reported that the Americas are home to five of the 10 countries with the highest number of COVID-19 cases over the past 24 hours: Brazil, the United States, Peru, Chile and Mexico.

The biggest rise in caseloads can be found in Brazil, Colombia, Chile, Peru, Mexico, Haiti, Argentina and Bolivia.

“While the numbers are not exponential, in some countries we are seeing a progressive increase in cases on a daily basis”, said Dr. Ryan.

“And countries are having to work very hard to both understand the scale of infection, but also health systems are beginning to come under pressure across the region.”

The Americas offer a mixed picture of COVID-19 responses on a national level, Dr. Ryan continued, with some countries taking what he described as an “all-of-government, all-of-society, inclusive, scientific-driven approach” to tackling the disease, and others struggling.

Factors that drive virus transmission across the region include complexities in population structure and urban poverty.

“I would certainly characterize that Central and South America in particular have very much become the intense zones of transmission for this virus as we speak, and I don’t believe that we have reached the peak in that transmission. And at this point, I cannot predict when we will”, he said.

Dr. Ryan called for support and international solidarity for countries in the region.

WHO is particularly concerned about the situation in Haiti due to the inherent weakness of the country’s health system.

Last month, an advisory group with the UN’s Economic and Social Council (ECOSOC) warned that the pandemic could trigger a humanitarian catastrophe in the Caribbean island nation, where six million people already live below the poverty line.