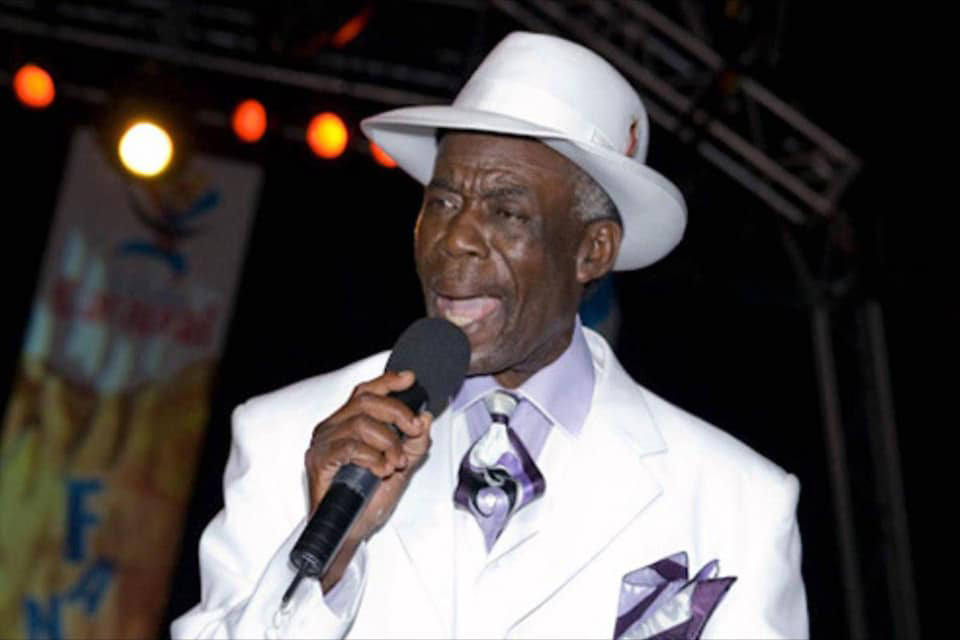 Following the news of the passing of calypsonian great Sir Rupert “King Swallow” Philo on Friday, fellow local singers, cultural and political officials, and soca and calypso artistes from across the region have been paying tribute.

One of those calypsonians is Vernon “Dr Solo” Benjamin who revealed that Swallow was his mentor. He says not only did Swallow influence his life but the majority of calypsonians locally and abroad too.

“He was my mentor. I even tried to emulate the type of music. Calypso is about song and dance and performance – that is calypso to me in my book. Ninety-five percent of the calypsonians that made it in Antigua and Barbuda, whether king or queen, they got their first exposure, they got their first teaching at the university of calypso and soca, Calypso Pepperpot, through Swallow,” said Benjamin.

Althea Williams, more popularly known as Singing Althea, one of the country’s top female calypsonians, also spoke on the impact Swallow had on her career.

“When I heard of Sir Rupert’s passing the tears rolled down my cheeks,” she said. “He was indeed a great calypsonian locally and internationally. His presence on stage was just dynamic.

“My first years in the calypso arena, Calypso Pepperpot was my first tent of choice that I performed at for a number of years. I am grateful for the opportunity he afforded me.

“One of my favourite songs of Sir Rupert is ‘Man to Man’. I had the opportunity of performing with him on stage one time. Sir Rupert was indeed a great man, a great advisor and he will be missed both at home and in the wider world. Long live calypso. Long live Sir Rupert ‘Swallow’ Philo; he will forever be a legend,” Williams added.

Famed soca star Machel Montano is one such Trinidadian artiste who thanked Swallow for his work which he said was “a great influence” on his career.

“As a teenager, and a bandleader of Pranasonic Express, I remember his songs being a great part of our repertoire as they have had heavy dominance in the Trinidad and Tobago music scene,” Montano said.

“I had the privilege of spending time with him in December 2019 at Charlie’s Records along with Charlie where we sat and laughed about old times; he was just humble and quiet. His legacy will live on,” Montano added.

A close friend and Barbadian calypsonian, Anthony ‘The Mighty Gabby’ Carter, also penned a heartful tribute to his comrade.

“Rupert was one of my closest friends in the music industry. He never saw the need for us to be a divided Caribbean,” Carter said.

“We worked on many stages together. If he went on before me, he would always come back to me and tell me if the mic’ was working well, or how the acoustics were in the building.

“Rupert would take me to lunch every time I went to Antigua; never at no fancy restaurant but always at a place selling delicious local food.

“He was a fantastic performer. He would always praise other artistes’ work. We both lived in New York at one time with Charlie’ s record shop a regular meeting place for us. B’s Restaurant and Studio was an integral part of our lives at that time too.

“Rupert would always find an excuse to take us to lunch to share jokes, bond as a calypso family. His self-penned songs are gems that will long outlive all of us. May my dear brother rest in peace,” he wrote.

Over his illustrious career, Philo was known for his social and political commentary, as well as his many hits which include Fire in the Backseat, Subway Jam, Party in Space and Satan Coming Down.

He earned several calypso crowns over his career and won the road march title five times.

Philo was born on February 14 1942 in the historic village of Willikies. He was awarded the Order of Merit (Gold), and the Grand Cross of Princely Heritage; each award was conferred in recognition of his sterling contribution to calypso. In November 2011, he was named Knight Commander of the Most Distinguished Order of the Nation (KCN).

The Mighty Swallow had been ailing from a string of illnesses in recent months which saw him admitted to Mount St John’s Medical Centre (MJSMC) and also to hospital in New York.  He was 78.