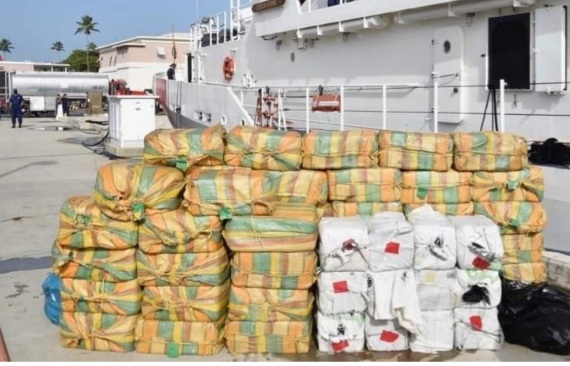 (Timescaribbeanonline.com) – The cocaine was seized from the house of a BVI police officer, according to Mick Matthews, commissioner of the Royal Police Force of the BVI.

“The value of the seizure equates to around 75 percent of our entire national budget in the BVI. It is also one of the largest seizures in the history of any British Overseas Territory or the UK,” said Mr. Jaspert. “I share these figures as an illustration of just how large this seizure is. The Police conducted exceptional and high risk work to enable such a significant seizure. Its size indicates that drug smuggling can potentially have debilitating and deteriorating effects on our territory, and the level of safety and good governance we expect and deserve.”

The officer whose house the cocaine was found at has been identified as 41-year-old Darren Davis, who has been a police officer for 20 years.

The operation was conducted by a special BVI police unit handpicked to lead the high-stakes effort. Investigators are preparing a probe into Mr. Davis and his brother, Liston Davis, both of whom have been arrested, and possibly others — including any other corrupt police officers.

“This is not the work of a few criminals sneaking through the cracks or a one off. A seizure of this scale, especially when combined with other seizures made in recent months, is strong evidence of serious and organized criminality here in BVI,” Mr. Jaspert said. “The investigation is at an early stage, but regrettably, the involvement of a police officer indicates that there may be pockets of corruption facilitating this kind of illicit activity. It is important that we act fast to eliminate and prevent this corruption from growing further.”

Police Commissioner Mathews lauded the officers who conducted the successful operation. “I have nothing but praise for the brave work of my team,” he said on Twitter.

The drugs will be destroyed after being tested, which is standard BVI protocol.

The $250 million drug confiscation comes as the British Virgin Islands remains under a Covid-19 induced nighttime curfew, which prohibits the movement of private boats at night in BVI waters.

The cocaine was found hidden in 63 bundles in three vehicles at the house of Darren Davis, the police officer.