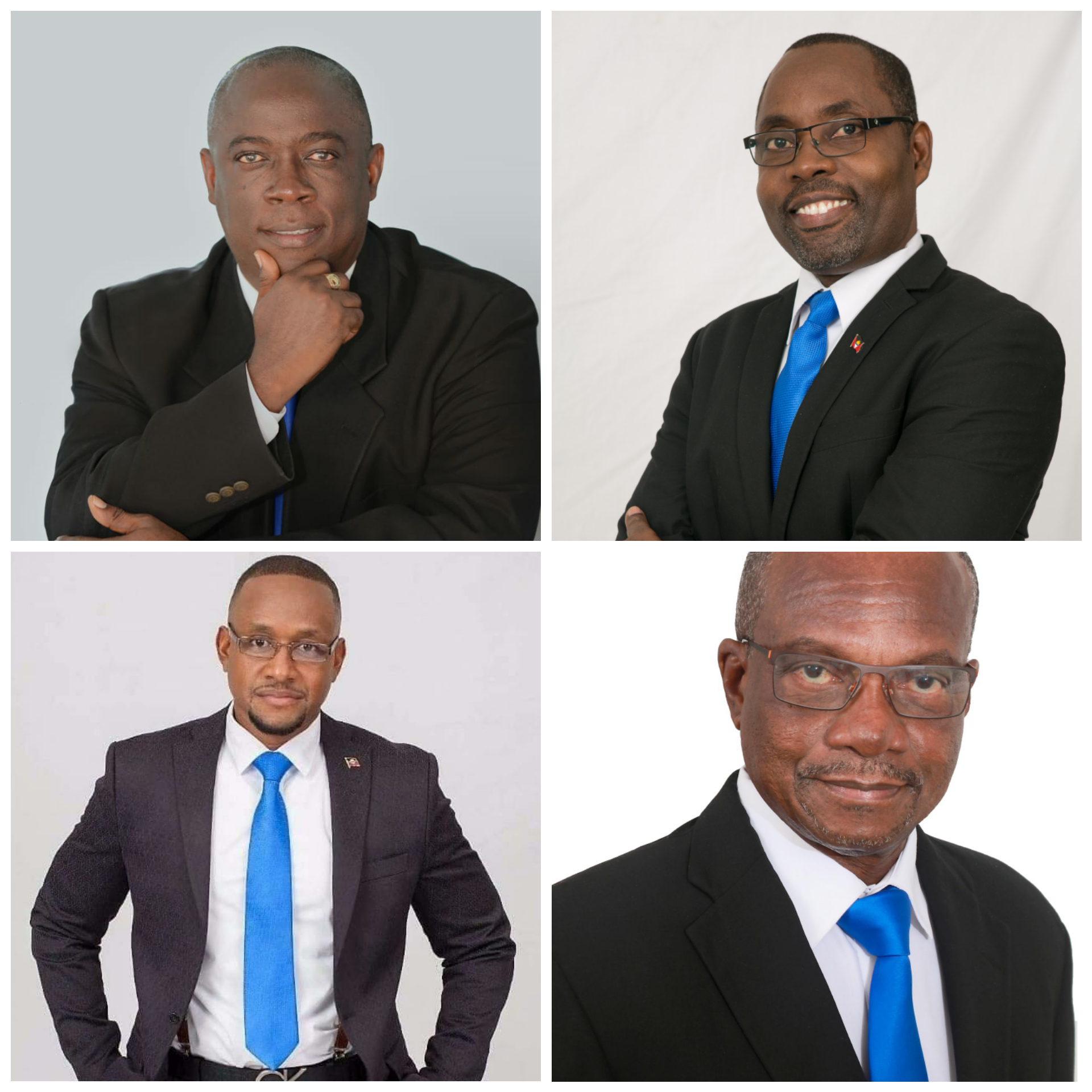 The Political Leader, Harold Lovell, and the Leadership Group of the United Progressive Party (UPP) are pleased to present the first four members of the Party’s slate to contest the next General Elections.

After a comprehensive process of applications and vetting, including interviews and endorsements, these four have been approved to carry the Party’s flag in their constituencies.

The Leadership thanks the Branches, Membership, Supporters and the wider public for their patience. It was our intention to begin the roll-out of candidates since the end of the first quarter of the year, i.e., in March 2020.

However, as the Country – understandably so – was engaged with handling the COVID-19 crisis, it was agreed that a delay was in order.

The ensuing State of Emergency – with its imposition of curfew hours; prohibition of gatherings; and social-distancing requirements – meant that the Party’s usual procedures could not be implemented, and that adjustments had to be made to the timelines. However, another four Candidates will be named during the week of June 22, 2020.

An “East Man” through and through, Alex Browne was born and raised in the village of Willikies; was educated at Willikies Primary School; and, later, as an educator, spent three years teaching there. His secondary years were spent at Pares Secondary School, from which he graduated, and then he pursued higher education at the Antigua State College.

After he left teaching, Alex decided to pursue a career in the hospitality industry, the lifeblood of the Antigua & Barbuda economy, for which he had the perfect personality.

After completing a two-year Management Trainee Program at the Pineapple Beach Resort, Alex climbed steadily and was appointed to several Executive Management positions. These included Rooms Division Manager, Food & Beverage Manager, and Resort Manager. His career took him to other Caribbean islands and properties, where he also held senior management positions.

However, his love for country and, in particular, the Food & Beverage Department brought him back home, and he took up positions as General Manager for both the fine-dining Pavilion Restaurant and the Sticky Wicket Restaurant.

After the collapse of the Stanford Group (which owned these two establishments), Alex returned to the hotel industry, full-time, at the Jolly Beach Resort. Since then, he has held several positions – Maitre’d, Training & Standards Manager, Food & Beverage Manager, and Resident Manager, the position he currently holds.

Alex is involved in several organizations whose main goals are giving back to the Community and Nation on a whole. He is a founding member of the The Sons and Daughters of Willikies, as well as a past President of the Glanvilles Football Club, Willikies Football Club, and the Willikies 4H Club.

But he is not all work and no play, because Alex is also an avid songwriter and playwright.

A person who can be depended upon to serve the St. Phillip’s North Constituency and his country, Alex Browne has a genuine love for people and a love for the progress the UPP represents.

Michael Burton’s roots are deeply embedded in the soil of his constituency, starting at his primary institution, the venerable Foundation Mixed School on South and Tanner Streets.

From there, he went across Independence Avenue (East Street) to the St. Joseph’s Academy, before going abroad to further his education.

“Burton for Certain,” as he likes to be known, attended South Broward High School in Florida; South College in Tennessee; and Alabama State University, earning a BSc. in Business Administration.

His keen interest in the Royal Police Force of Antigua & Barbuda no doubt stems from his service in the US Army during peace time and active war. He served at Fort Benning, Georgia, with the Infantry 11B regiment; at Fort Lee, Virgina, with Logistical Supplies, 92A; at Camp Casey, in South Korea; and at Fort Campbell, Kentucky, 101st Airborne, and was deployed to the conflicts in Kuwait and Iraq.

In his civilian life, he has served as PTA President of St. Joseph’s Academy and provides yearly sponsorship of the Teacher of the Year and the Top Student at the Mary E. Piggot Primary School and to the St. Vincent de Paul Society of the Catholic Church.

In his efforts to improve and upgrade the professionalism and image of local law-enforcement, Burton has donated electronic equipment (laptops , tablets, flash drives) to the Police Force and drafted proposals for prison-reformation and work programs and assistance to under-privileged youth.

Burton, whose business sits in the middle of the Ovals commercial centre, intends to represent his St. John’s City South constituents with the same zeal and honour with which he served the United States Army.

No stranger to politics, Richard Lewis represented the Party in the 2018 elections after 13 dedicated years as Chairman of the Constituency Branch. He is currently the Senate Minority Leader in Parliament, as well as a community and social activist.

For four years, Lewis held the position of Vice Chair of the UPP; was Labour Relations Officer for two years; and is credited with updating the Party’s Constitution as a member of the Constitution Review Committee.

In addition, he held office in a number of organizations, including the Teachers Union; the Information Technology Teachers Association; the National Advisory Council on Education; and the Antigua & Barbuda Student Association (Jamaica).

As an IT Management Consultant, Lewis has been a member of the Association of

But Senator Lewis is positioned not only to define education and shape IT policies; he is qualified to be a game-changer for the youth, as well. He served the Young Men’s

Christian Association (Antigua) and the Christian Children Fund and Project

Lifestyle (Antigua & Barbuda), and was listed on the Ministry of Sports’ National Honour Roll for his contribution to sports.

In terms of business acumen, Lewis spent nine years as a Director of the Antigua and Barbuda Development Bank and five years on the Board of the National Training

A distinguished scholar, this Green Bay Primary and Ottos Comprehensive alumnus went on to become Valedictorian of his Antigua State College graduating class.

Management Information Systems from the Graduate School of Computer and

University of Technology (Jamaica), where he was awarded the President’s Gold Medal for outstanding academic achievement.

He also holds diplomas in Accounting, Fitness & Nutrition, and Photography.

As multi-talented as the constituents of St. John’s Rural West, Senator Lewis is determined to bring representation back to the community he calls home.

For both his contributions to culture and Carnival and to socio-political issues, Alister Thomas is a household name in Antigua & Barbuda.

Born and raised in The Point, when it was the nexus of social, economic and political life, Thomas has a wealth of information on, and a passion for, the elevation of cultural expression in art, music, and Mas’, as well as for the economic empowerment of citizens.

His professional appointments in culture include:

And specifically in the arena of Carnival, his contributions are:

For his contributions in all these areas of national life, “Alister,” as he is fondly called, was recognized with a National Honour: Grand Officer of the Most Precious Order of Princely Heritage (GCH) on the 25th Anniversary of Independence, November 2006.

Thomas has served The People in other diverse and important capacities that include:

To all of these assignments and positions, Alister brought his formidable intellect, energies, and commitment to excellence. The United Progessive Party is confident he will go even further in the interest of the St. John’s City West Constituency.