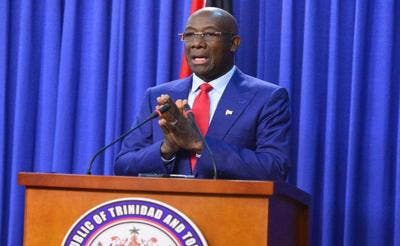 (Trinidad Express) – A worrying increase in Covid-19 coronavirus infections has resulted in a rollback in public health measures to reduce public exposure of risk.

Prime Minister Dr Keith Rowley announced on Saturday that Trinidad and Tobago had reached community spread and it was time to take action.

He said schools and all teaching institutions will remain closed at least until December 31.

Secondary Entrance Assessment (SEA) examination, however, will remain on August 20.

For the next 28 days, Rowley said, starting at 6am on Monday all in-house dining at restaurant and bars will cease including food courts at malls. These food establishments will be allowed to sell take-out.

He also announced the closure of beaches and rivers, places of worship, gyms, contact sports, water parks, casinos and members clubs and cinemas.

Rowley said authorised gatherings of persons outside of homes will be no more than five.

Persons attending weddings and funerals will be reduced to 10. (Not ten at a time. A total of ten).

He said maxi taxi and taxis will be allowed to operate at 50 percent capacity.

Travel to Tobago will also be restricted to essentials.

The prime minister made the announcements at the Diplomatic Centre in Port-of-Spain, as he delivered his first public address since being elected for a second term.

He said, “If these activities do not get the level of observance as we expect and numbers get far worse, even after we have done this, the next situation is to go into more complete closure. It is very important that what we are doing now is done to the letter so we don’t find ourselves in a situation where we have to do in the lockdown.”

Rowley said he was having discussions with the Attorney General on what action will take with respect to mandatory use of face mask.

The People’s National Movement (PNM) won the August 10 general election 22/19 last Monday. However, a Cabinet has not yet been sworn in as the United National Congress (UNC) has requested a recount in five marginal seats.

As at Saturday afternoon, the Ministry of Health reported 474 Covid-19 positive cases. Two deaths were reported on Friday, an elderly woman and a man.