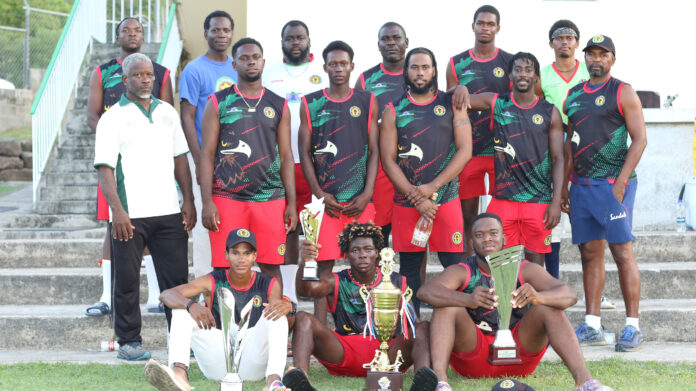 PIC Liberta Blackhawks completed a hattrick of titles with a thrilling three-wicket triumph over rivals Empire Nation in the final of the Antigua and Barbuda Cricket Association (ABCA) Two Day Competition over the weekend.

Not many had envisioned such an exciting match going into the final and, with both teams boasting impressive batting line-ups, it was even more interesting when it turned into a contest of bowing prowess.

Winning the toss and opting to field at home, Blackhawks were led by their spinners as Kadeem Phillip bagged five for 33 in 16.5 overs with five maidens, while Leeward Islands player, Kofi James also snatched five wickets but for 59 runs in 19 overs, as they restricted Nation to 130 all out in 49.5 overs.

Captain Justin Athanaze was best with the bat for Nation with 48 from 34 deliveries. He struck three fours and four sixes during the 59 minutes spent at the crease.

But just when the home team may have thought they had it in the bag, they were stung by decisive bowling from Athanaze with four for 23 in 10.5 overs, while Cleton Payne (3/1) and Ajahrie Joseph (3/37) helped to restrict Blackhawks to just 105 all out from 29.5 overs. James made 69 from 48 deliveries, hitting seven fours and five huge sixes.

Blackhawks then batted down into the evening on the second day to reach their target at 141 for seven in 27.3 overs. Fittingly, it was James who led the charge with 76 from 63 deliveries.

Athanaze was again the pick of the bowlers for Nation with three for 50 in 13 overs while Damian Lowenfield had two for 22 in five overs. The successful Blackhawks team had previously captured the ABCA’s’ Super40 title in March with an 83 runs victory over Pigotts Crushers at the Coolidge Cricket Ground (CCG) while in May, they captured the Cool & Smooth T20 Explosion after beating CUB Bethesda Golden Eagles by 89 runs at the same venue.