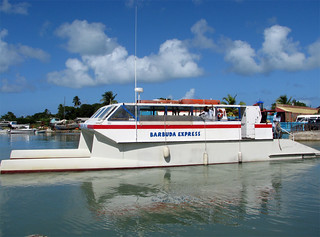 By Theresa Goodwin and Latrishka Thomas

The Barbuda Council has announced a partial lifting of Covid-19 restrictions allowing limited interisland ferry travel as of May 27.

Ferries will only be allowed to operate two days per week, Wednesdays and Fridays, transporting a maximum 25 passengers per trip for now.

The council says yachts are still prevented from docking on the sister island. The document, signed by Secretary Paul Nedd, also made it clear that no day tours will be permitted until further notice.

The Barbuda Express and Caribe Breeze are expected to resume service. But the owner of Island Escape, which is primarily responsible for transporting workers to the Peace, Love and Happiness (PLH) work site, told Observer the company would not be restarting operations yet.

Mark Rosandich said the stipulated days of the week did not make economic sense for the company.

“If I had a Monday we would go ahead and jump and start running but until I get a Monday, I just can’t do it economically. That is a big, big boat and 25 people doesn’t even cover my fuel,” he explained.

Rosandich said that he respects the Barbuda Council’s decision, adding, “I am happy that you guys are being careful and doing a soft start…we stand by for you in event of an emergency.”

The decision to resume ferry services was made by a resolution this week following a recommendation from Barbuda’s medical team.

It also comes a day after resident doctor Jeremy Deazle said Barbuda was in a position where it could ease travel restrictions to the mainland. But he suggested that the government should tread carefully as officials forge ahead with reopening the international airport and welcoming tourists back.

“I think right now we should start doing some trials with locals and leave the tourists for last. We should not jump the gun and reopen the country in a time like this; we should not rush to reopen not knowing what the situation is like outside,” Dr Deazle added.