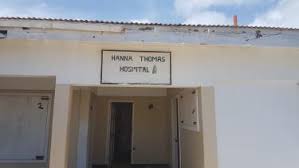 Residents on the sister isle are a step closer to being able to use Barbuda’s lone hospital again as the keys are set to be officially handed to the Council next week.

Council Secretary Paul Nedd told Observer renovations to the Hanna Thomas Hospital – which was destroyed by Hurricane Irma in 2017 – were roughly half complete.
The authority will now be responsible for completing the works before it is reopened to the public.

The United Nations Development Programme (UNDP) and Roberts Construction signed a contract to rehabilitate the medical facility after the devastating category five storm. It was signed under the umbrella of the India-UN Development Partnership Fund, and after consultations with the government.

The rehabilitation work finally began in November 2018, and following a few setbacks – including the Covid-19 pandemic – the hospital will now be back in the hands of the Barbudan people.

Barbuda’s MP Trevor Walker confirmed the development on Thursday, while speaking on Observer AM.

Despite ongoing tension over critical supplies donated to the hospital, Walker voiced his gratitude to all the donors for their support so far.

The hospital is one of the final remaining public facilities to have been retrofitted post-Irma, following the re-opening of the Holy Trinity Primary School last September, along with the sports complex and the Ernest Beazer Lewis Daycare Centre also in 2019.