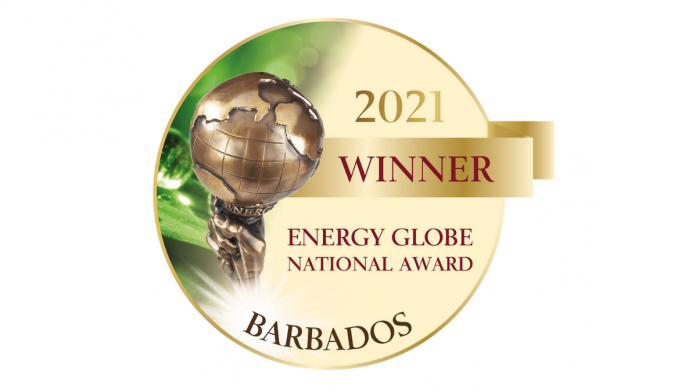 (City of Belmopan, Belize) The Caribbean Community Climate Change Centre (CCCCC)
has won, for the third time, the coveted national ENERGY GLOBE Award
(https://www.energyglobe.info/national/winner/barbados). This time, the award was
conferred on a project funded by Green Climate Fund (GCF) that is being implemented in
Barbados by the CCCCC, in collaboration with the Barbados Water Authority. The project

utilization of water through the incorporation of renewable energy technologies.
Renowned as the most important global energy award for sustainability, by Arthur D.
Little, the award was established some 20 years ago, and honors the best projects
addressing environmental issues. Awards are provided annually to agencies and
individuals worldwide, in both the private and public sectors and the NGO Community.
There are five award categories – Earth, Fire, Water, Air, Youth, and a special category
which varies from year to year. The CCCCC won in the water category at the end of 2021

for its tremendous work transforming the water sector in Barbados. “The WSRN S-
Barbados project is a flagship GCF project being implemented by the CCCCC, a regional

Direct Access Entity to the GCF and it is one of the best performing projects globally
among Small Island Development States (SIDS)” says Dr. Colin Young, Executive
Director at the CCCCC. “We are honoured to have won this award; it demonstrates the
capacity and experience of the CCCCC to develop and implement, in partnership with
CARICOM Member States, innovative and transformative projects that build the climate
resilience and sustainable development of our Caribbean people,” he added.
According to Dr. Elon Cadogan, Project Manager of the WSRN S-Barbados in a recent
article, “With climate change, Barbados has experienced negative impacts to its water
resources, where water scarcity has increased the vulnerability of its population, especially
to small farmers, and entrepreneurs. During drought periods, the island has experienced

3
rd Floor, David McKoy Building, Bliss Parade, P.O. Box 563, Belmopan, BELIZE
Tel: (501)822-1104 or 1094, Fax: (501)822-1365, Website: www.caribbeanclimate.bz
decreasing underground recharge rates of its aquifers, which provide ninety-five percent
(95%) of the island’s potable water.” Droughts have also affected the agricultural sector by
reducing crop yields and productivity, in addition to causing premature death of livestock
and poultry.
In an effort to improve the water resilience of Barbados to the effects of climate change,
the Government of Barbados and the CCCCC secured a grant of US$27.6 million from the
Green Climate Fund in 2015. Combined, with the co-financing from the BWA, the total
project will invest over US$45.2M to improve the water resilience of Barbados over 5
years. To date, the project has installed PV systems at the Bowmanston pumping station
on the island, to be followed by installing additional PV systems at the Belle and Hampton
pumping stations, thus providing renewable energy power to support the distribution of
potable water to households and the surrounding distribution network, inclusive of farms
and hurricane shelters. At the Belle pumping station, a station that supports most of the
essential services, a natural gas micro-turbine will provide backup power on the possible
occurrence of Utility grid failure.
The energy globe award is presented annually, with award ceremonies held nationally and
internationally. Over 180 countries submit environmental projects for consideration.