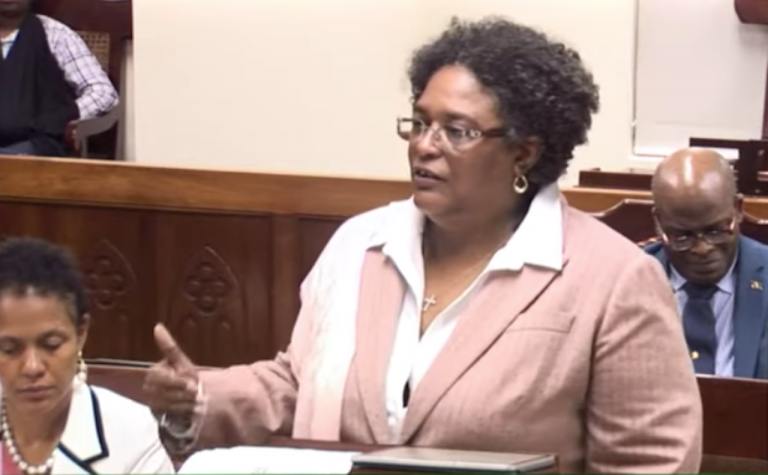 (Barbados Today) – A $20-million “survival” stimulus package was announced Friday night by the Prime Minister to provide critical assistance to thousands of people and businesses in light of the expected calamity from the coronavirus crisis.

She has enlisted the social welfare system, the private sector, banks and pop icon Rihanna in the effort.

In a three-hour speech to wrap up debate on the Estimates of Revenue and Expenditure which was later passed as the Appropriation Bill, Mottley announced the immediate establishment of a Household Survival Programme to help more 1,500 vulnerable families.

Under this stimulus package, Government would provide up to $600 per month to each family through the Welfare Department.

There will also be a 40 per cent increase in all rates and fees paid by the Welfare Department to individuals.

“These funds must be the subject of urgent action,” said Mottley.

At the same time, Mottley said Government has asked the private sector to match that stimulus package through an Adopt-a-family programme, where those who earn more than $100,000 annually (over 5,200 people), would also provide up to $600 per month to the fund for families in need.

The fund, which is to be in place for an initial three to six months for the Adopt-a-Family programme was launched Friday at CIBC FirstCaribbean Bank, Mottley announced, adding that details of how to access it would be released in the coming days.

Prime Minister Mottley said: “This Household Survival programme of $20 million in the first instance will be topped up if it is not enough.

“The most important thing is for people to keep their heads above water. It is not a kill cow. I wish I could do more. But the important thing now is not to leave anybody behind.

“I am happy to announce that the Massy Foundation has already agreed to seed that Fund with the sum of $250,000 immediately in the first instance.”

Superstar Rihanna has pitched in $1.2 million to buy ventilators as the country seeks to shore up its medical treatment capacity for the respiratory illness, the Prime Minister revealed.

Additionally, companies that keep at least three quarters of their workforce will be deferred from paying three months of employers’ National Insurance Scheme (NIS) contributions.

She also announced that after meetings with the Barbados Bankers’ Association over the past two weeks it was agreed there would be a six-month moratorium on all existing loans and mortgages for individuals and businesses who are directly impacted by COVID-19.

Mottley also announced that the Barbados Water Authority would be turning on over 3,000 taps that have been disconnected.

“It is the view of my Government that now is not the time to talk about money when people are at risk of being victims of a pandemic.

“Therefore, immediately I am asking the Barbados Water Authority to turn back on the water for all of those customers for the next three to six months,” said Mottley, who added that she was equally asking those customers to start paying what they can on their arrears.

Those were among a gamut of “survival” supporting measures outlined by Mottley to help Barbadians “keep their heads above water” as the country begins to feel major effects from the COVID-19 outbreak that originated in Wuhan, China in late December.

Several hotels, tour companies and other tourism-related services have started to close their doors putting thousands of workers on the bread line or dramatically reducing work hours, as countries close their borders to non-nationals and airlines start to ground flights.

Other industries, including transport, retail, stand-alone restaurants and beauty parlours, are also beginning to face hardship as the island recorded its first cases of the COVID-19 – six on island and one on a cruise ship docked off the shores as of Friday.

The survival measures also include the following:

· Government will facilitate and fast track a number of private sector investments that are ready to be done.

· Government will refinance the Small Hotel Investment Fund with $20 million to allow small hotels to borrow “and blend with other funds” and refurbish their properties during the down period, and they will pay interest rate of 3.5 per cent instead of five per cent

· Individuals in the creative industry (entertainers, musicians, artists, dancers) will benefit from $1 million that will be taken from the Arts and Sports Development Fund and placed under a special programme

“I am also calling on all landlords to desist from putting out anybody at this stage and remind us that at this stage this is a entreaty and a request,” said Mottley, who indicated that if it was required she would go back to Parliament to “convert the request into law”.

She said Government may have to return to Parliament to discuss the “domestic food security food programme”, though insisting that there was enough food supply to take the island through the COVID-19 pandemic for several months.

The Prime Minister said her administration would be encouraging the Barbados National Oil Company Limited (BNOCL) and the Barbados Light and Power (BL&P) “to engage in a hedging exercise to lock in the currently low oil prices for a period of up to two years”.

Mottley said Government has also committed to speeding up hundreds of millions of dollars of capital projects that would also provide employment for some of those now affected by the COVID-19.

The Prime Minister said: “I don’t know if this is going to be enough, but I do know that whatever it takes to keep Barbadians heads above the water this Government shall do it.”