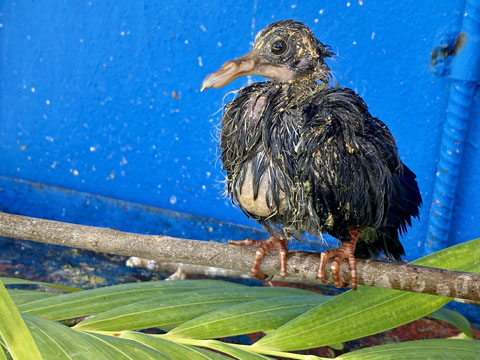 Six baby birds have been rescued and cared for by a local animal lover after losing their home amidst preparations for Tropical Storm Laura.

Kind-hearted Coast Guard staff knew the chicks could die if left unattended and wasted no time in stepping in to help.

“Some flew away but some were very still; I think they were frightened by the noise of the chainsaw,” officer Ernest Davis told Observer. “We were able to collect them and put them in a cardboard box. We put straw that they use for their nests in the bottom; we wanted to make sure they were comfortable while we took them to safety,” he added.

With the help of local wildlife experts, the birds were transported to the home of Martha Watkins-Gilkes, a well-known environmentalist who has rescued numerous creatures over the years.

Gilkes told Observer she has been feeding the chicks and preparing them for freedom.

“Some people say to me, why do you care about a bird’s life? But every little creature deserves to have a chance at life. So, for me, it deserves just as much as something else, or a human even,” Gilkes said.

Her dedication to the cause led Gilkes to shelter the baby birds in her guest bathroom until the storm had passed on Saturday. Since then, she has built a holding cage for them until she is sure they are eating enough to be set free.

“One flew out of the cage this morning when I put their food in, so it was ready to go,” she said.

Compassion for the birds was displayed not only by Gilkes but by those who saved them as well, she explained.

“They put nice branches, soft branches in the bottom of the box so the little birds would have something soft to sit on, so I was quite impressed with how they arrived to me,” she said.

Gilkes’ previous rescues include juvenile ducks and even a baby dolphin found stranded on an Antiguan beach in January last year.

“Animal rescue can be a soul-destroying effort as it is very hard to rehabilitate baby birds. Nothing is like the mother bird raising them… But when you have success and give a life a chance that otherwise would not have lived, it is very rewarding,” she said.

“Mahatma Gandhi said the greatness of a nation and its moral progress can be judged by the way its animals are treated. We need to all be more kind to our animals, great and small,” Gilkes added.

The white-crowned pigeon is a near-threatened species found primarily in the Caribbean region. It breeds in several islands, including Antigua. The birds are skittish creatures and will abandon a nest when encroached upon.

What should I do if I find a baby bird?