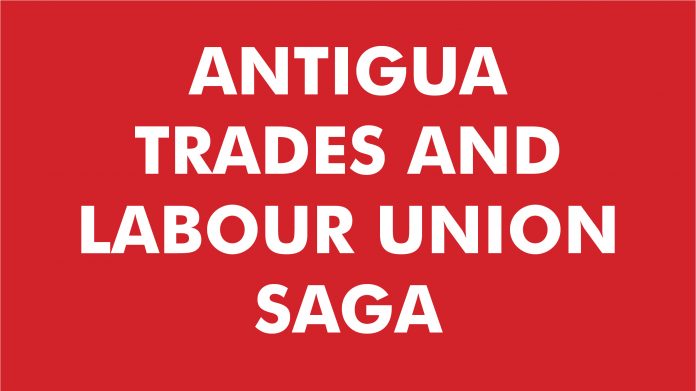 The division within the Antigua Trades and Labour Union’s (AT&LU) executive came to a head yesterday when President Wigley George disrupted a media briefing ahead of today’s scheduled Special Conference of Delegates.

Reports are that the conference is intended to address issues related to George’s leadership and to also elect a new executive that will lead the union forward, but one section of the current executive will not be participating.

According to General Secretary Hugh Joseph, who hosted yesterday’s briefing alongside other disgruntled executive members, they are opposed to the manner in which the conference was organised and the media briefing was meant to clarify their position for the benefit of the union’s membership.

But soon after the proceedings began, the President walked into the room and disrupted the briefing, questioning its purpose and suggesting that there would be some sort of action taken in response.

“This is not an industrial relations issue…I just went to an attorney on this whole thing and where the chips fall, let it be. This is an illegal move that is being used to expose the union’s business at the highest level, that of the executive.”

George walked out soon after making those remarks, but Joseph maintained that the members of the executive who were gathered do have the right to communicate with their membership by way of the media briefing, especially considering the current circumstances.

He explained that after the union’s annual conference was postponed from September last year on account of the ongoing Covid-19 pandemic, a decision was made earlier this year to host a “special conference” on February 23, which – based on the union’s constitution – occurs when there is “a single issue of urgent importance such that it cannot wait until the convening of the next scheduled conference”.

Joseph said he was further advised that the purpose of the conference was to “reaffirm the commitment and viability of the union to the members”.

After starting to prepare the circular for the event – which he insisted has been the responsibility of the office of General Secretary for some time – and requiring some clarity, he said he was given the run-around by the President, who soon after took over the responsibility and unceremoniously excluded him from any further communication.

As Joseph put it, “as the General Secretary of the Antigua Trades and Labour Union, I have not seen the circular that speaks to the convening of the Special Conference scheduled for [Wednesday]”.

He contends that the conference, if it does go ahead as planned, will not be considered a legitimate union meeting.

“We have looked at it and we’ve decided that if the conference proceeds, it’s going to be – in our view – an illegal gathering in [the context] of the constitution of the union, [because] it has not met the guidelines or the requirements set out there.

“We have decided that we would not be participating in that conference [and] if we are present at the gathering, it is not to participate but more so to protest, to let the membership know of our strong objection to what is happening,” he said in response to a query from Observer.

The division between the ‘two sides’ of the executive went up a notch last year, when they apparently disagreed internally over the approach to be taken toward the government’s implementation of the Covid-19 vaccination mandate for public workers.

Some have suggested too, that the continued disagreement is part of a deeper attempt to separate the union from the Antigua and Barbuda Labour Party (ABLP), but Joseph insisted yesterday that that is definitely not the case.

“I have no interest in terms of pulling away the union from the party. If the government, or any employer for that matter, comes with a policy or any action that is against the union or against its membership, I think the union – myself and other officers – has that obligation, that responsibility to [contest it].

“That is the sole purpose for which the institution was formed, to make the lives of the people that we represent better, and that is my focus.

“So, those who are telling those stories, tell them to come again and to tell the people to what end that would be the case,” he added.