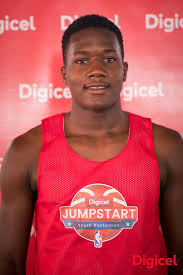 One Antiguan players says he is optimistic in his preparation for his new journey.

National junior basketballer, Javonte Valerie, will be hoping to leave his mark as the former St. Anthony’s Secondary School (SASS) player will be making the move to play for Calusa Preparatory School in Miami, Florida.

Calusa Prep is the same school at which another Antiguan player, Jabari Williams, will play his final season.

Valerie has already made his mark on the local scene having led his high school team to its first ever championship in the Cool and Smooth Inter-school basketball program where he was named the MVP. He is also a two-time playoff champion in Division Three of the Antigua and Barbuda Basketball Association (ABBA) competition with his team, Wadadli Elites, and has also been previously selected in the top six players from Antigua to be a part of the Digicel NBA Jumpstart program.

Valerie, 18, who will also be completing his high school career there, says he is excited at the task at hand.

“I am very excited that I am getting the opportunity to prove myself at this school, playing a new position and just going there and dominating,” said Valerie.

He will be transferring from Victory Rock Highschool.

When asked about what his future plans are, Valerie mentioned the ultimate goal is to make it to the NBA.

“My goal this year is to just get myself to a level I have never been before and get a major Division One school offer so that I can get in the dance for the NBA scouting.”

Valerie thanked his parents, Tamara and Gregg Valerie, his friends, coaches George Hughes and Irwin ‘Wanga’ Armstrong, and the Vibrant Faith ministry for their support.